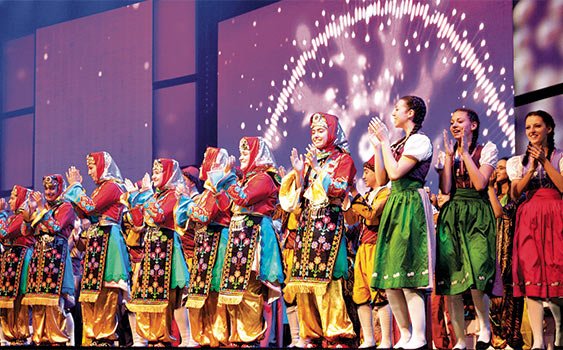 Many countries that are home to Turkish schools have been holding similar language and culture festivals this month to select students to compete in the 12th International Turkish Olympiads in June.

The students competed with each other in the categories of poem recitation, singing and reading. Students who ranked highly were awarded with golden medals.

A state lawmaker from the Social Democratic Party of Austria (SPÖ), Christian Hursky, and the president of the Vienna Chamber of Commerce and Industry’s educational department, Mag. Erich Huber, were among the event’s participants.

The 12th International Turkish Olympiads is being organized by the International Turkish Education Association (TÜRKÇEDER). Each year, the event brings together hundreds of foreign students from Turkish schools around the world. It is held each year in the first two weeks of June. There will be also various performances by Turkish Olympiads students in various Turkish cities during the Olympiad period.

Each year, thousands of students around the world prepare for the Olympiads, but only those who win in the national competitions are invited to the international competition in Turkey. Meanwhile, Madagascar’s Olympiads qualifications were also held on Saturday evening, with hundreds in attendance.