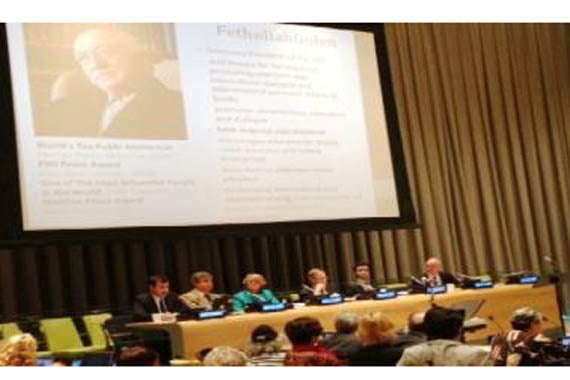 Here you can find the full speech of Mr. Hüseyin Hurmalı (Secretary General of (Journalists and Writers Foundation) Abant Platform)

It is my privilege to speak at the United Nations Culture of Peace High Level Meeting.
I want to thank H.E. Vuk Jeremic, President of the United Nations General Assembly and H.E. Ambassador Abdul Momen, Permanent Representative of Bangladesh to the UN, who invited me to share our ideas and thoughts about the role of interfaith cooperation in promoting a global culture of peace.

Today, it has been heartening to see such prominent leaders from member states, civil society, academia and the United Nations, display such a deep and broad commitment to the principles of Interfaith Dialogue and the Culture of Peace from multiple perspectives. Personally, I am encouraged by the speakers’ willingness to share and openly discuss actions, experiences and challenges. Working together across sectors in this way to address the most pressing issues facing international community and society is promising for a peaceful world for today and tomorrow.

Today’s High Level Meeting, once again, made it abundantly clear that government and civil society leadership should go hand-in-hand. This will help us build the supportive measures needed to create peaceful co-existence. And it will ultimately help improve the lives of many people around the world.

The global and local initiatives set the stage for individual and collective actions on peace building. They send a powerful message to governments and civil society everywhere about the need for interfaith cooperation.

As stated by the UNESCO Director-General, “Peace is more than the absence of war; it is living together with our differences – of sex, race, language, religion or culture…” Therefore, in order to be effective in promoting the culture of peace, interfaith dialogue initiatives should not only be designed and implemented in post-conflict regions, but also they should be part of everyday life in all nations. As we have witnessed in recent years, very peaceful societies can someday become very violent as a result of clashes among ethnic and religious groups. Therefore, all initiatives that advance the culture of peace including interfaith dialogue programs should be established and promoted in all nations to prevent future conflicts.
Please allow me brief you about Journalists and Writers Foundation and its vision, which is  “Toward Universal Peace.” The JWF was founded in 1994 with a main principle of promoting peace, love, tolerance and open dialogue in the society. Our mission is to create a common living space for all based on reconciliation and mutual respect. Our strategy involves bringing intellectuals from diverse cultural, religious, ethnic and ideological backgrounds to find solutions to our local and global problems. The JWF encounters all forms of extremism and radicalization by pursuing intercultural and interfaith dialog, which, are the two most important solutions for all social, political, cultural and religious conflicts around the globe.

Journalists and Writers Foundation believes that interfaith dialogue and interfaith cooperation are a must in today’s world as people can communicate ideas and images with millions around the world with a few clicks on a keyboard.

As the JWF, we find inspiration in the ideas of our Founding and Honorary President Fethullah Gulen, in working towards peace throughout the world. As a prominent thinker and intellectual, Mr. Gulen lays out the basic principles of achieving peace by focusing on the human element. The JWF acts on the premise that three greatest enemies of achieving peace are “ignorance, poverty, and internal schism.”  We believe that the political, economic and legal regulations for sustainable peace can never have a lasting effect if the people consisting of the society are not educated on universally accepted values like human rights, freedom of expression, equality of opportunities, peaceful coexistence, and above all wishing for others what one wishes for himself/herself.

Educated global citizens with diverse socio-economic backgrounds who have a will to build a common prosperous future for all can achieve peace. We are inspired by this brief statement of Gulen:

As ignorance is the most serious problem, it must be opposed with education, which always has been the most important way of serving humanity. Ignorance can be defeated through education, poverty through work and the possession of capital, and internal schism and separatism through unity, dialogue, and tolerance. As the solution of every problem in this life ultimately depends on human beings, education is the most effective vehicle, regardless of whether we have a paralyzed social and political system or we have one that operates like clockwork.

In order to promote Intercultural and interfaith dialogue, our honorary president visited world religious leaders including Pope John Paul II, Greek Orthodox Patriarch Bartholomew, Chief Rabbi of Turkey Rabbi Eliyahu BakhsiDoron, and many others to give a message of love, tolerance, mutual understanding and respect to the society at large.

The iftar dinners were held in Ramadan, where representatives of Abrahamic religions as well as people from different segments of the society sat around the same table. This underlined the Foundation’s emphasis on dialogue, together with the meeting on The Art of Living Together and Tolerance, where the choirs of three Abrahamic religions performed on stage together at the end.

Later, many interfaith dialogue centers and cultural centers throughout the world organized Ramadan Iftar Dinners and Friendship Dinners as an instrument to build culture of peace an expression of friendship and harmony in the societies.

It’s also important to provide opportunities for young people from all ethnic, religious, cultural backgrounds to experience living in a pluralistic society and in their school environment, while accessing the universal tools for scientific and technological innovation as well as being equipped with necessary language, writing, artistic and thinking skills to be the agents of peace in their regions.

We all have to make an effort to know and understand one another, accept everyone as they are, appreciate our commonalities and respect our differences.  This is the first step toward interfaith dialogue. We need to collaborate and cooperate in solving today’s problems facing our global world.

Finally, I would like to end my words with a quote from our honorary president;

Be so tolerant that your heart becomes wide like the ocean,

Become inspired with faith and love for others.

Offer a hand to those in trouble, and

Be concerned about everyone…

Here you can find the full speech of Mr. Hüseyin Hurmalı (Secretary General of Abant Platform)