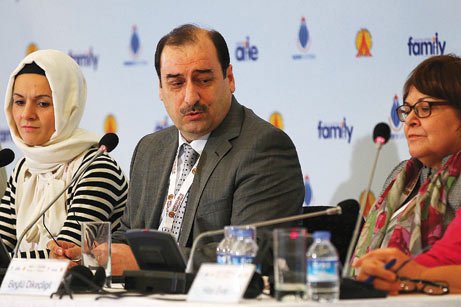 Experts who attended an international conference titled “Family and Community Violence” emphasized in a declaration that violence is a threat to the family, which is the most important institution in a society. (Photo: Today's Zaman)

Social sanctions will be necessary alongside legal measures if domestic violence is to be curbed in Turkey, according to experts from a number of fields who gathered at a conference of the Journalists and Writers Foundation (GYV) in İstanbul on Sunday, marking the International Day for the Elimination of Violence against Women.

The international conference, titled “Family and Community Violence,” kicked off with a reception at the Harbiye Congress Center on Friday night, where the event will be held from Nov. 24 to 26. Thirty academics from 15 countries are expected to attend the three-day conference. Six sessions will be held during the conference with the titles “Family and Violence: International Perspectives,” “Domestic Violence and its Legal Aspects,” “Violence against Children and its Consequences,” “Family and Violence: Religious Perspectives,” and “Domestic Violence and its Social Aspects.”

Speaking during the session “Domestic Violence and its Legal Aspects,” on Sunday, Lawyer Fatma Benli pointed to the role of social sanctions in the prevention of violence in Turkey. She stated if people who witness a domestic violence incident keep silent, people who carry out violence will believe they have the right to do so. “Yes, many legal measures have been adopted in order to prevent domestic violence or protect its victims in the recent years in our country. Law 6284 on the Prevention of Violence against Women and the Protection of the Family, which came into force in March, 2012, is the widest one. However, it should not be forgotten that adopting legislative measures are not sufficient. The prevention of domestic violence is not a goal that can be achieved with just legal processes. The government can not prevent domestic violence alone; every person in the community has the responsibility in achieving this goal. Social sanctions should be adopted in a society. People who are close to those who commit acts of domestic violence must react harshly to this behavior in order to deter them from doing so again. Sometimes social responses are more effective than legal ones in a society,” Benli noted.

‘Discrimination against headscarved women in Turkey is economical violence’

Making a presentation during the conference on Sunday, Hilal Elver — a research professor of Global Studies at the University of California, Santa Barbara — said that headscarved women are subject to serious discrimination both in public and at work in Turkey. “Women who wear a headscarf are unable to participate in many places of work. They also face great discrimination at work. For example, many headscarved lawyers are not accepted into courtrooms, simply because of their headscarf. Because those women can not enter legal hearings, many people avoid hiring them. These discriminative acts can be described as economical violence. Many bar associations such as İstanbul, Ankara and İzmir Bar Associations refuse to accept headscarved lawyers into their associations. The right of defense for accused are violated by such acts,” Elver noted. Elver also described the discrimination headscarved women face in universities, calling this a violation of the right to education. She said that discrimination against headscarved women should be prevented. “Necessary measures should be adopted while Turkey is working on constructing a new constitution,” Elver commented.

During her opening speech, Minister Şahin said family and violence are two terms that should never be voiced together. She also stated that the institution of family is generally associated with love, compassion, respect, confidence and togetherness, adding that it is a great contradiction that violence exists within such an institution.

Arguing that greater awareness in the decision to tie the knot will contribute to strengthening the institution of family, Minister Şahin announced a pilot program launched by the Ministry to counsel to married couples in Burdur. Şahin noted increasing rates of divorce in Turkey and world, and described the services her ministry’s initiative would offer: “The experts from the centers will meet with couples seeking divorce and try to find out the problems that pushed them to consider divorce. If possible, the counselors will help the couple work past their issues. If the problems cannot be solved, then the couples will get a divorce. In Burdur, where the pilot scheme for the project is underway, out of 25 couples that filed for divorce, five couples changed their mind thanks to contributions of experts from the marriage counseling centers.”

During his speech, GYV Chairman Yeşil said: “An ideal community can be formed with ideal individuals. The first place in which a person acquires their personality and values is the family. Think of the trauma that a child can suffer due to domestic violence in his or her family during the period when personality is developing most critically. Such traumas can lead to behavior disorders later in life. We should do whatever is possible to prevent this; that is why we have gathered here today.”

Indian Professor Laxmi Narsimha Swamy of the Hyderabad-based Osmania University, one of the conference’s participants, told Today’s Zaman that in almost every nation, women are subject to domestic violence particularly because of unemployment and unequal income distribution in their societies. “In order to solve these kinds of problems, women must be empowered by being provided basic education and training in job skills. Governments and relevant organizations should be involved in developing schemes for providing employment to women in rural areas,” Swamy noted.