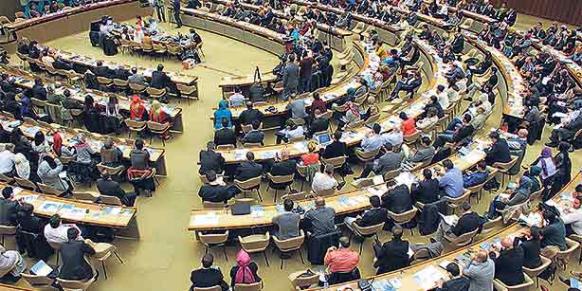 International participants gathered on Friday for the Geneva Peace Conference that took place at the UN building in the city. (Photo: Cihan)

At a United Nations conference organized by the Journalists and Writers Foundation (GYV) on Friday in Geneva, a wide range of participants agreed that global challenges against peace should not lead to apathy, while reiterating their commitment against all kinds of extremism.

Organized on United Nations Day, which is celebrated annually on Oct. 24, the conference in Geneva witnessed daylong debates on how to build peace and foster freedoms. The GYV, which has a consultative status with the UN Economic and Social Council (ECOSOC), held the conference along with the Switzerland-based Dialog Institut and the University of Geneva, with the participation of prominent academics, civil society leaders and diplomatic representatives.

The honorary president of the GYV, Islamic scholar Fethullah Gülen, sent a message to the conference, which was read out loud by the German historian and journalist Jochen Thies. In his message, Gülen emphasized the importance of investing in human beings while stating that “building peace means building peace-loving men.”

According to Gülen, the issue of Jerusalem and Palestine seem to be the source of almost all conflicts in the Middle East and requires a solution. Bringing up the proposal he made seven years ago, Gülen said that a supra-national and supra-religious status, including visa-free access for the followers of all religions might be a solution. His proposal also includes the development of a unique administration for Jerusalem, which would be governed by a committee under the United Nations with representatives of the three Abrahamic religions. According to Gülen, such a proposal is relevant more than ever today “as the ISIS [Islamic State of Iraq and the Levant, or ISIL] terror continues to agonize the Middle East.” He noted that the name of Jerusalem originates from “Darussalam,” which means “the land of peace.”

Touching upon the critical role of the media in peace building, Gülen said the media should understand that when it chooses to twist the truth and facts, promote the culture of conflict and polarize the society as being comprised of “us and them,” the resulting destruction will not be limited to its own time and will also sooner or later turn back on the media itself, and recovery from it will take years, or even generations.

One of the speakers at the conference, a professor from Georgetown University, Thomas Michel, underlined the importance of justice and forgiveness as tools to achieve peace. He says one is not possible without the other as noting that without serving justice no forgiveness should be expected from the victims of oppressors. According to Michel, the way to make people forgive their oppressors is to increase dialogue among groups with animosity against each other.
The conference had 800 registered participants from 50 countries and also hosted representatives from over 40 countries. Among 10 ambassadors that attended the conference were ones from Belgium, Afghanistan, Algeria, Sierra Leone and the Organization of the Islamic Conference (OIC).

After daylong intensive meetings, the conference suggested five tools as the modus operandi of peace building: interfaith dialogue, justice and forgiveness, education (especially to foster intercultural understanding), forming institutions to promote peace and for peace speech to replace the hate speech that is prevalent, especially in social media.

Religion not source of violence

The participants, who came from different faiths, agreed at the conference that religion is not the source of violence and the lack of peace. According to the president of the GYV, Mustafa Yeşil, religion should rather be seen as a solution to the problem. According to Yeşil, the civil society in the form of religious network organizations has the primary role in realizing this.

Rabbi Ehud Bandel, vice president of the International Council of Christians and Jews in Israel said religion is rarely the source of conflict. According to him, the Palestine issue is a conflict between Israelis and Palestinians, not between Jews and Muslims.

Professor Tarıq Ramadan, from Oxford University, underlined the significance of having freedom to learn and practice one’s religion, especially in countries where the religion’s followers are in the minority. He said one should be able to condemn mistakes to contribute to peace, as he stated that he condemns terrorist ISIL. Norwegian politician and theologian Gunnar Johan Stalsett noted in his remarks that religions are under threat of being hijacked by extremists.

The media was one of the dominant themes of the conference. Yeşil said the dissemination of information is extremely important in a globalized world and there are many instances in which the irresponsible use of the media’s power leads to a deepening of already existing conflicts.

Speaking of the status of the media in Turkey, Professor Cengiz Aktar from İstanbul’s Süleyman Şah University said social peace and democracy in Turkey is under serious threat, since polarization is on the rise due to people’s difficulty to access genuine information.

According to diplomatic correspondent Myung-bok Bae from South Korea, at the expense of reliability and for the sake of fast reporting the media provides erroneous information and biased opinions, which feed biases among people.

After talking about Geneva’s status as an international guarantor of peace and human rights, Anders Smith Serrano, from the Office of the Director General at the UN in Geneva, emphasized the importance of media freedom.

The conference agreed that it is difficult to talk about peace when there is so much talk of war around the world, however, as Dr. Heinrich Kreft, Director for Public Diplomacy and Dialogue Among Civilizations from the German Foreign Ministry, said, a call for promoting “peace speech” was underlined.

The Sarvodaya Shramadana Movement from Sri Lanka and the University of Peace in Costa Rica were cited as some examples of the best practices to contribute to peace building.
The Geneva Peace Conference ended with the announcement of a final declaration and was followed by a reception.