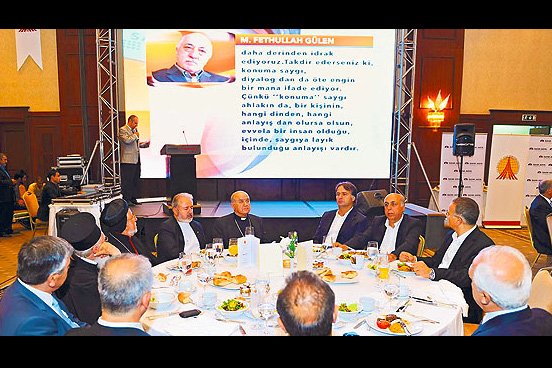 Journalists and Writers Foundation Honorary President Fethullah Gülen greeted guests with a message he issued for the GYV iftar on Tuesday night.

Many distinguished figures including Turkey’s spiritual leaders, politicians, artists, businessmen and journalists came together at the same iftar (fast-breaking dinner) table on Tuesday night in an event held by the Journalists and Writers Foundation (GYV).

GYV Honorary President Fethullah Gülen greeted the guests with a message he issued for the night. “Ramadan is a climate of compassion and mercy. In these blessed days when patience and tolerance prevail, we once more remember love, peace, modesty, cooperation and living for others,” Gülen said in his message.

Gülen underscored the importance of dialogue and mutual understanding. “We comprehend the importance of not victimizing anybody with our judgments and of communicating face-to-face regardless of our ideologies,” he said and added, “Despite all provocations and stimulations to create polarization, these gatherings show that our people have this potential [of peace] and they are of great value to refreshing our hopes for the future.”

Gülen also commented on famine-stricken Somalia and the violent conflict in Syria. “During this Ramadan, when our hearts are hurt with every child that dies and with the images of starving people, it is surely a great virtue to extend a helping hand to those who suffer from hunger in Africa. As far as I can follow in the media, our entire nation comes to the aid of those who are in need and it is a living proof that the humanity has not died.”

“On the other hand, while we expected the bloodshed to cease and tears to stop flowing just a tiny bit during this blessed month, the ongoing incidents in Syria hurt our hearts. The pains our neighbor [Syria] suffers are our pains, too. Let us pray for an end to the bloodshed and for peaceful, common-sense solutions for the problems,” Gülen said.

‘Common language of the colors’

At the iftar, which was themed “the common language of the colors,” the guests expressed their wish for peace and tolerance.

In his remarks after the iftar, Greek Orthodox Patriarch Bartholomew said although the believers of different faiths worship in different ways, they share the same blessing. He said the Ramadan is important for decreasing dependence on the material and setting the spirit free. “We must reflect the love within in Ramadan,” Bartholomew said. He also greeted Gülen during his speech and said they share a good friendship. “Gülen is a guide on a path that is virtuous and challenging as well,” he said.

Addressing the guests, GYV President Mustafa Yeşil highlighted the importance of getting together and said: “We see how much we have in common when we come together. Our gathering is not a need but a must. We have a chair for everybody at our table.”

Noting that the iftar table of the GYV gathered all colors of Turkey, including Muslims and non-Muslims, employees and employers, government and opposition, Minister Bağış said the table of Turkey indeed has room for everybody. “I hope Ramadan will help us overcome our problems,” he said, adding his hope that violence, terrorism, lack of tolerance and suppression ends in Ramadan. In his address, Bağış wished peace for Syria and prosperity for famine-hit Africa. At the end of his speech, the minister said he was happy for the return of Kemal Burkay, a Kurdish politician, novelist and poet. Burkay recently returned home after a 31-year-long exile in Sweden.

Religious Affairs Directorate Vice President Yılmaz said it is a necessity for mankind to learn how to coexist with people from different religious communities. “It is beautiful to be together with friends. It is a privilege to be together with the spiritual leaders and representatives of other beliefs,” Yılmaz said.

The GYV was founded in 1994, and the mission and work of the foundation are inspired by GYV Honorary President Gülen, known for his teachings of hizmet (service), tolerance and dialogue. The Turkish nongovernmental organization shapes its vision of national and global unity through its five independent platforms and research center. These independent platforms each specialize in a different field, contributing to both the GYV’s and Turkey’s intellectual wealth.

The Abant Platform, a think tank named after Lake Abant, the location of its first meeting, is now a very important platform where Turkish intellectuals from all segments of society discuss recent issues and the country’s most pressing problems. The Medialog Platform was founded by and brings together the media and academics to produce a meaningful discussion of important issues in the world of journalism. The Dialogue Eurasia Platform is a regional intellectual department that organizes events to further develop dialogue based on the belief that a lack of communication and understanding is the main source of global conflicts today. The Intercultural Dialogue Platform provides a staple of two panel discussions a month, one in English and the other in Turkish. In all, the platform organizes about 50 panel discussions in a given year. The GYV Research Center serves as a documentation center for a wide scope of issues the foundation has addressed.