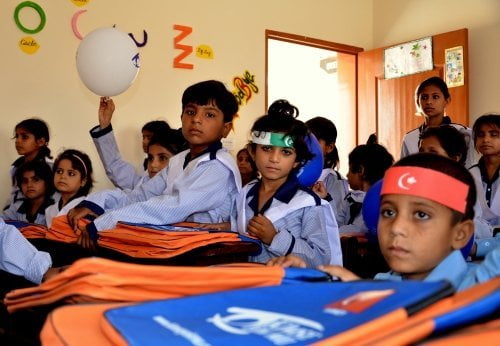 Aid efforts to heal the wounds after the flood leaving million Pakistanis homeless in 2010 have been continuing ever since the disaster. In the Ikbaliye town established in Muzaffargarh by Kimse Yok Mu for 296 homeless flood victims, everyone of all ages are happy today. Students are receiving education at no charge while their families are doing their own business provided for them. Additionally, the foundation gave away school uniforms and stationery to 300 students that it’s has offered full scholarship to. Fully equipped with facilities such as schools and mosques, the town is now filled with the students’ joy.

The aid distribution took place with the participation of the Muzaffargarh District Coordination official Hafiz Sevket. Sevket spoke to Cihan News Agency: “Kimse Yok Mu established this town with a school, mosque and other facilities. It’s been educating 300 students for free. We can see the friendship between the Turkish and Pakistani people. We would like to thank Kimse Yok Mu for providing us all these.”

Ozcan Inan, the KYM official in the town for the aid distribution, said, “We are happy to give educational assistance to our Pakistani friends. It’s easy to see the happiness in the children’s eyes. As KYM’s Pakistan mission, we would like to thank the giving Turkish people for their donations.”

Additionally, sewing training courses have been launched at the school for the town’s women. Trainees will be given certificates and be able to find a job upon completion of the program. One of the trainees said, “We are able to sew clothes for our children and ourselves thanks to this training. It’s such a great opportunity for us. Many thanks to the Turkish people for their help.”

Established in Sept. 14, 2013, the Ikbaliye town has been home to 296 flood victims. With its mosque, school, sanitation staff, graveyard and water storage, the town functions as a role model in the country.