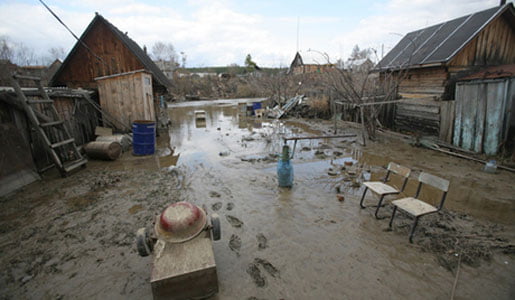 The aid organization Kimse Yok Mu (Is Anybody There) has extended a helping hand to the people of Tajikistan to meet their humanitarian needs after severe floods struck the country last month. Kimse Yok Mu sent a team of doctors, a search-and-rescue crew and an emergency governance expert to Uyali, a town in the province of Khatlon, which is among the areas affected most by the floods.

According to Kimse Yok Mu President Mehmet Özkara, buildings in the town have been heavily damaged by mudflow caused by the flooding. The district hospital and school have been completely destroyed, he said, adding that the floods resulted in the displacement of almost 2,500 Uyali residents, among a population of 6,000.

The government of Tajikistan has provided tents for the displaced families, while around 450 families are staying with relatives and are in urgent need of food and sanitation supplies.

The association launched the campaign on Monday, and food and other supplies were expected to be delivered to 2,500 families over the course of two days, Özkara said. “We obtain and distribute the aid with the help of Turkish schools located in Tajikistan and thanks to Turkish entrepreneurs there.” He added that the association will continue to support Tajikistan’s flood victims.

Dr. Marcia Hermansen, the Director of the Islamic World Studies Program and a Professor in the Theology Department at the Jesuit Loyola University Chicago, presented a lecture on Hizmet Movement (here after HM) at Indialogue Foundation, New Delhi on 7 March 2012. Dr. Hermansen teaches courses in Islamic Studies and the academic study of religion. […]