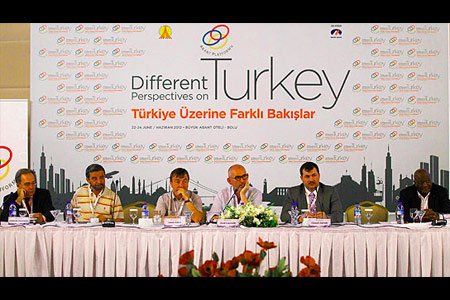 No matter the problems related to the European Union’s historical financial crisis and Turkey’s loss of enthusiasm regarding membership in the EU; participants of the 27th Abant meeting, titled “Different Perspectives on Turkey,” have said that Turkey needs the EU in order to improve its fragile democracy.

“Why does Turkey want to be in the EU?” asked Kurdish intellectual Ümit Fırat of the Helsinki Citizens Association. “Because the EU reforms have provided the much needed push for Turkey to make democratic reforms,” he answered, taking the floor on Saturday at the conference, which aimed to discuss contemporary cultural and political issues in Turkey and was held from June 22-24 in the province of Bolu.

In the morning session, “Turkey’s EU Journey,” Fırat and others reflected on the prospects of Turkey’s EU membership, as the Turkish reform process has stalled and the EU has been experiencing membership fatigue, and as positivity regarding enlargement has given way to skepticism.

Moderating the session and making the introductory remarks, Joost Lagendijk of the Sabancı University’s İstanbul Policy Center said there is hesitation on both side — the EU and Turkey — in that regard. He posed the question of whether or not there is a desire to cease negotiations on the Turkish or European side.

“On the EU side, you need unanimity to [cease negotiations] and that unanimity will never be there,” he said. “On the other hand, Turkey could come to the conclusion that it is time to stop, but there are no signs of that.” Lagendijk added that there is an agreement between the EU and Turkey on the long-running issue of visa liberalization.

Foreign Minister Ahmet Davutoğlu announced recently that Turkey has initialed a long-discussed readmission agreement between the EU and Turkey, envisaging the repatriation of illegal migrants to Europe via Turkey after temporary stays in the latter, in response to key steps outlined by the EU for a visa-free agreement with Turkey. EU countries made a first step toward a visa-free agreement with Turkey on June 20, authorizing the European Commission to start negotiations.

Asked whether there have been structural changes in Turkey, implying that Ankara is preparing to give up its commitment to membership in the EU, Abdullah Bozkurt, the Ankara bureau chief of Today’s Zaman, said this is not the case. “Ankara is still determined in that regard. Trade relations are very strong with the EU, and most visitors to Turkey still come from EU countries. Ankara wants to be in the club; it is still determined to be in the decision-making process,” he said.

A rising Muslim democracy, Turkey began accession talks with Brussels in 2005, but progress has been painfully slow, hobbled by tensions between Ankara and EU-member state Greek Cyprus, as well as opposition from France and Germany.

Levent Köker, the president of the Abant Platform, said at the same session that part of the problem is the prevailing nationalism in Turkey on the part of both the ruling government and the opposition.

“Both the government and opposition parties are building on nationalistic ideas. This is quite problematic,” he said.

Critical of Turkey for its slowdown in the reform process, Abdülhamit Bilici, a columnist at the Zaman daily, said Turkey could follow through on many of the reforms despite French and German opposition. “Maybe economic chapters could not be opened without guarantees, but there could be progress made on others, such as the environment, the judiciary, etc.,” he said.

Participants also dealt with the changes of leadership in both France and Germany, speculating that there may be greater support in those countries now for Turkey’s membership.

Most of the participants also remarked that Turkey, despite its economic development and rising self-confidence, still needs EU standards for its citizens as there is a great need for transparency and accountability.

Cafer Solgun, an Alevi-Kurdish writer who chairs the Confrontation Society, based in İstanbul, has raised concerns about the course that the government is taking in its third term, in which it has enjoyed more power than ever before. “When it first came to power almost 10 years ago, the government needed the EU’s support. But now it’s so powerful it seems like it is giving up on the reform process because it does not need the EU so much anymore,” he said.

In addition, Mihail Vasiliadis, the editor-in-chief of Apoyevmatini, a Greek weekly published in İstanbul, said the EU is not well understood in Turkey. “What the EU is all about has not been explained in Turkey. The decisions taken in Brussels are not only about Turkey; those decisions are important for all EU countries, not only Turkey,” he said.

In Saturday’s afternoon session participants focused on Turkey’s economic development, covering issues including sustainability of that development and how to balance the needs of a growing economy with environmental concerns.

Meetings of the Abant Platform, which are organized by the Journalists and Writers Foundation (GYV), bring together people from different cultures, ideological backgrounds and religions to find common solutions to common problems. The sessions are designed to allow for open discussions, rather than expert panels, among participants about issues at the top of Turkey’s agenda.

On Friday, the first day of the meeting, participants discussed Turkey’s democratization process and Turkish foreign policy, particularly in regard to the Middle East.