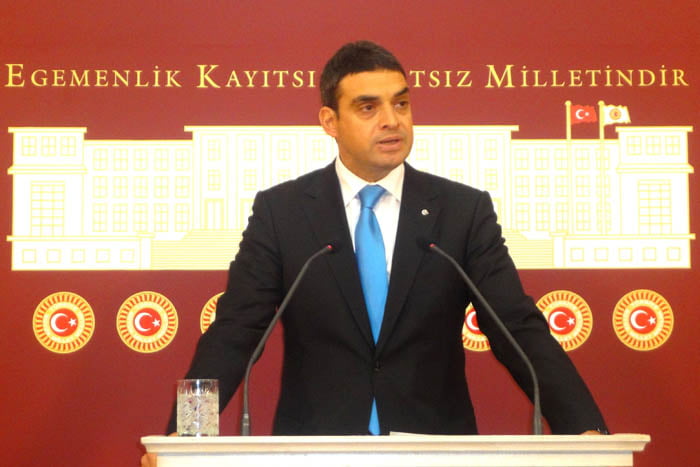 During his speech in Adana, Deputy Umut Oran claimed Erdoğan never read the constitution upon which he had taken an oath.

Oran read from Article 104 of the Constitution, “The president represents the Republic of Turkey, and the unity of the Turkish nation; he ensures the implementation of the Turkish Constitution and the organized and harmonious functioning of the organs of state.

The CHP deputy pointed out it does not say the president can threaten or can give instructions to the MGK to bring down an organization.
According to this Monday’s Taraf daily, the ruling AK Party (Justice and Development Party) is planning to put forward a proposal to MGK to consider the Hizmet movement as illegal. Erdoğan hinted that the MGK would take action against “parallel structures.” The “parallel structure” is a term invented by Erdoğan to refer to sympathizers of the Hizmet movement, inspired by Turkish Islamic scholar Fethullah Gülen, within the police and the judiciary. He claims the “parallel state” seeks to topple his government.
“If the president goes beyond his constitutional authority, it will be a crime,” said Oran.

CHP deputy Umut underlined that while the Kobani protests have been turning to violent riots and threatening the nation’s unity across the country, Prime Minister Ahmet Davutoğlu and President Erdoğan go to rallies, province by province, to opening ceremonies of various investment projects.

“When the president continues to propagandize and make political speeches distant from reality, like Hitler’s propaganda minister Goebbels did, the public is deceived with lies,” he said.

Oran said after the government-backed platform victory in election of the Supreme Board of Judges and Prosecutors, the AK Party can ensure the judiciary will bend to the government’s will.

Sadık Çınar* In the last decade, the Hizmet movement has become a phenomenon in Turkish civil and political life. A shallow look from the outside, however, can lead to confusing and contrasting perceptions about the movement when it is only fed by newspaper articles, columnists and rumors. Politicians still think that the only means of political […]