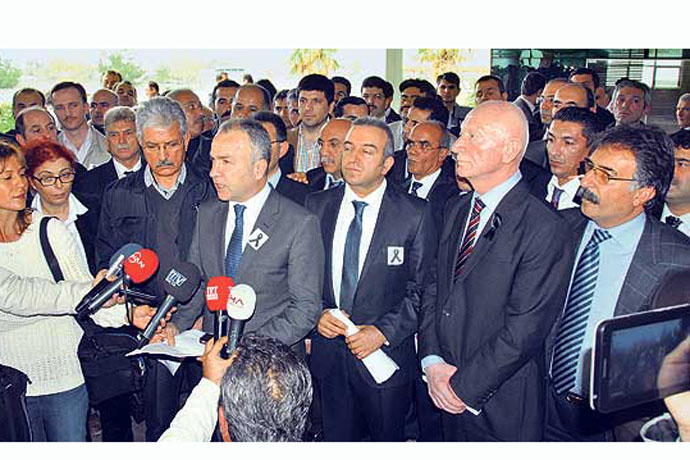 Representatives of foreign media outlets in İstanbul had a difficult time on Tuesday understanding the rationale behind the government’s decision to close private prep schools across Turkey.

The Journalists’ and Writers Foundation’s (GYV) Medialog Platform’s 26th meeting of the “Covering Turkey” seminar series held in İstanbul on Tuesday addressed a highly debated issue in the Turkish socio-political context: the past, present and future of prep schools. The questions of the foreign journalists present centered on how a government could shut down private institutions; they were unable to understand the intervention in private enterprise. A foreign correspondent said it would be no different to interfere with privately owned kebab houses. Frank Nordhausen from Berliner Zeitung and Frankfurter Rundschau told Today’s Zaman that based on what he heard in the meeting, he was not able to understand why it is necessary to close prep schools, since it would have a negative effect on the owners. He believes that Prime Minister Recep Tayyip Erdoğan might be doing it to please some constituency whom he believes is unhappy with prep schools.

“Erdoğan says that he wants to make prep schools private, but they are already private,” said another Turkey-based journalist, Ricardo Gines from La Vanguardia, in comments to Today’s Zaman. He says that it is not clear why the government wants to close the prep schools.

Addressing the media gathering, Faruk Ardıç, the head of the college guidance and counseling department for FEM publishing, the largest prep school network in the Hizmet movement, said that the prep schools are not the cause, but rather the result of the low quality of public education in Turkey. According to him, it is the low and middle income families who will be most negatively affected by the government’s decision, as prep schools provide an opportunity for their kids to even the competition in the centralized exams.

Referring to an internal Ministry of Education report of 2010, Ardıç said that the ministry itself suggested that in order to solve the problems of the education system, all public schools should be brought to the same level. Similarly, Ardıç also talked about two different reports produced by SETA (the Foundation for Political, Economic and Social Research, a pro-government think tank) that also contradict the government’s arguments about prep schools. According to the first report, prep schools serve as institutions that contribute to social equality. “The reasons that make students attend prep schools should be eliminated before closing them,” Ardıç read from the report, and he added that prep schools are not rivals to public schools, but complementary to them. Providing figures from a survey conducted by Yıldız Technical University, Ardıç said that 86 percent of parents believe that prep schools are the result of the existing education system. Based on the same university survey, he also noted that 77.7 percent of the students who attend prep schools go due to inequalities in the education system. However, according to Ardıç, even if all prep schools were transformed into private schools, due to competition, there would still be a need for supplementary courses. However, he also said that only 10 percent of the approximately 3,000 private prep schools in Turkey meet the government requirements to become private schools, as was suggested in the government’s proposal.

Education-wise, the decision does not make sense

If private prep schools are forced to close, they will go underground, as happened in South Korea in the past, Ardıç further argued.

Responding to a question about the connection between prep schools and the Hizmet movement inspired by the Islamic scholar Fethullah Gülen, the vice president of GYV, Cemal Uşak, said that there is no umbrella organization for the Hizmet movement, but there are hundreds and thousands of organizations and entrepreneurs such as GYV, who are inspired by the teachings of Gülen.

Uşak said that it would be tragic to punish all the prep school owners who have nothing to do with the movement, even if it is to be assumed that the government is targeting the movement. “Even if we are wrong, we would like to believe that this is solely about education,” Uşak further added.

“I am one of those who believes that the prime minister is misinformed on this issue,” Uşak commented, as he referred to Erdoğan’s remark that only 10 percent of the population benefits from the prep schools as an example. Uşak also noted that the two SETA reports on prep schools came up with contradictory findings when they were published only one year apart.

In response to a question about whether the government consulted any stakeholders before making the decision, Ardıç said that the representatives of prep school associations Güven-Der, Özde-Bir and Toder said on Monday in a meeting at the İstanbul Chamber of Commerce (İTO) that they were not able to make an appointment with government officials regarding the prep school plans.

Responding questions on the real motives for the government’s decision to shut down prep schools, Uşak said that even the idea that this initiative was undertaken to “teach the Hizmet community a lesson” disturbs him. “I have known Fethullah Gülen for almost 40 years. If this is a punishment, I do not think he has done anything for the prime minister to punish him,” Uşak said.

However, according to him, if the government insists on carrying out the plan to shut down private prep courses, there would be an “emotional break up” between the followers of the Hizmet movement and the government.

On a question as to whether the prime minister is likely to modify his policy on prep schools, Uşak said that this is his hope, as he has made changes to his policies in the past, such as the abortion issue. “He wanted to ban abortion, but when he saw the intense reaction from society, he gave up,” Uşak pointed out.

Responding to another question referring to Erdoğan’s statement that he has given the Hizmet movement whatever they wanted, Uşak said that one should ask Erdoğan specifically what he has given. “Even though he has been a close friend of mine, I have not received anything from him,” Uşak said.

Uşak also noted that the Hizmet movement is an advocate for European Union membership, human rights and democracy and has supported whoever acts in accordance with these principles. However, he said that recently, there have been suspicions among Hizmet followers in terms of the government’s commitment to these values.