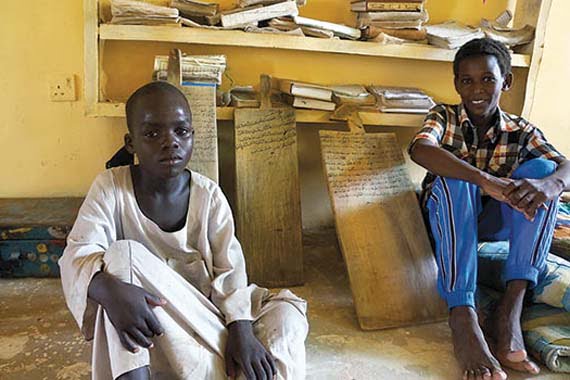 Thanks to Kimse Yok Mu Foundation’s (KYM) aid, the young residents of Gurkan Celikol Orphanage, who are receiving hafiz training at the same time, are now smiling at least a little. The pupils are memorizing verses from the Qur’an by copying them on wooden tablets as they lack the Qur’an copies.

Sudan is the country of children left orphaned due to civil war. Millions of Sudanese at hunger threshold are smiling at least a little thanks to aid from NGOs during Ramadan. We’ve been to Gurkan Celikol Orphanage in Nyala city of Darfur as a part of KYM “Time for help all around the world” campaign. “Welcome, the most caring people of the world. Your visit gives us hope for our future,” said 16-year-old hafiz Nurettin greeting us at the door. Likewise, Sheikh Hasan Abdullah said they’re grateful for the aid.

In addition to another centrally-located orphanage’s renovation, KYM also seeks to finance orphans’ shelter and food needs. The orphans here are studying at a public school while they receive hafiz training from Sheikh Hasan Abdullah. They are memorizing the scripture from wooden tablet copies as they lack enough number of the Qur’an. Abdullah noted the pupils are memorizing faster this way and thus there have been many having qualified as hafiz. The pupils are copying the assigned verses on wooden tablets with battery charcoals. Melting charcoals to the favorable density in a special container, they start copying them on the tablet with reed pens. After memorizing the copied verses they leave the tablets in water and allow some time for the writings to erase themselves. Out of respect for the Qur’an, Sheikh Hasan said they do not wipe or scrape them out.

Nurettin, who himself is a hafiz too and looking after the young ones, lost his father to a clash during the civil war four years ago. His mother and eight siblings are living with his uncle. His uncle left him to the orphanage as he wouldn’t be able to afford to take care of them all. An orphanage resident for 4 years, Nurettin has been receiving Qur’an instruction during his time off school. He said he missed his family a lot but had to stay at the orphanage at Eid al-Fitr as he wouldn’t be able to afford to go visit them. He is well aware that the reason behind the instability in his country is lack of education and wants to serve his country after completing high school and university education. He is assisting with the young pupils’ education. “You, Turks, are most caring people in the world. Your presence and visits give us hope for our future” Nurettin said adding that he has the visiting donators in his payers every day.

Top executives from the Turkish Confederation of Businessmen and Industrialists (TUSKON), one of the country’s leading business confederations, are in the Ethiopian capital of Addis Ababa to hold talks on mutual trade and investment relations with senior officials such as the Ethiopian prime minister and the ambassador to Ankara.