Senegalese Education Minister: I will send my daughter to Turkish schools 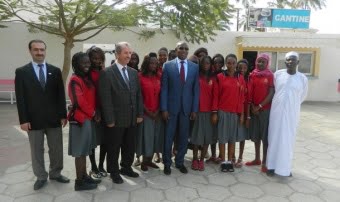 The Senegalese Minister of Education Mbaye Thiam paid a visit to Yavuz Sultan Selim Schools, founded by Turkish entrepreneurs and recognized highly across the country. Thiam said the schools, which produce champions annually in the nationwide university entrance exams, have had an indisputable success to date across the country.

The minister said the schools also introduced Turkey to Senegalese people. “I would like to send my daughter to these schools next year. The other private and public schools alike should take these schools as role models.”

Following a conference on health and hygiene at school environment, jointly organized by Cheikh Anta Diop University and Yavuz Selim Schools, the minister took a tour at Sultan School for Girls.