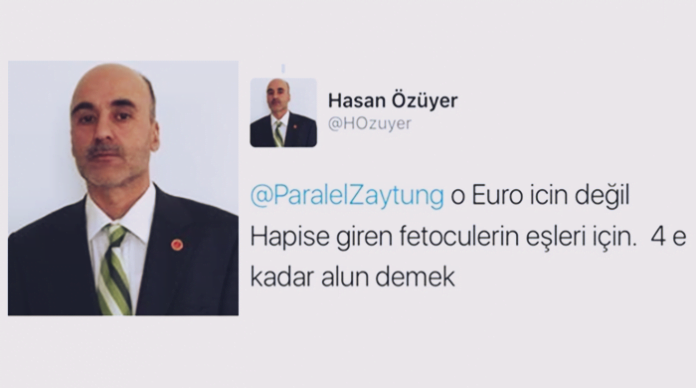 Responding to Twitter message that interpreted the Rabia sign, a four-finger hand gesture frequently used by President Recep Tayyip Erdoğan, as meaning the Turkish lira’s hitting rock bottom at TL 4 to the euro, Özüyer wrote from his Twitter account: “That [sign] is not for the euro. It is for the wives of jailed FETÖ supporters. It means you [shall] marry as many as four of them.”

FETÖ is a derogatory term coined by government circles to refer to sympathizers of the Gülen movement.

Özüyer’s remarks were reminiscent of the practices of Islamic State in Iraq and the Levant (ISIL) militants, who take women in the territories they occupy as their second, third and fourth wives.

Turkey survived a military coup attempt on July 15 that killed over 240 people and wounded more than a thousand others. Immediately after the putsch, the government along with President Erdoğan pinned the blame on the Gülen movement.

Despite Gülen and the movement having denied the accusation, Erdoğan — calling the coup attempt “a gift from God” — and the government launched a widespread purge aimed at cleansing sympathizers of the movement from within state institutions, dehumanizing its popular figures and putting them in custody.

Turkey’s unprecedented witch-hunt had resulted in the imprisonment of 41,752 people as of Dec. 30, according to the tally of turkeypurge.com while 135,356 people have been removed from public sector jobs since July 15.