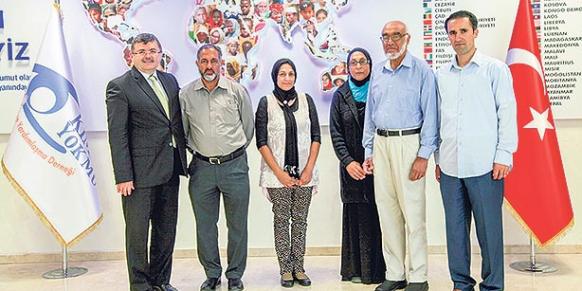 University of South Africa Professor Yousuf Dadoo has congratulated Kimse Yok Mu, one of the largest charity organizations in Turkey, for making its work a model for all charitable groups.

He said that during a recent visit to Turkey he had been privileged to spend some time with members of Kimse Yok Mu, a relief organization connected to the faith-based Hizmet movement.

He focused on the humanitarian aid campaigns that have been organized for Palestine, Lebanon, Peru, Bangladesh, Sudan, Darfur, Georgia, Turkey, Panama, the Philippines, Myanmar, China and Haiti. He continued: “They even boast representation inside Israel. It has facilitated aid to people in 60 countries during Ramadan and Eid al-Adha, while its broad operations have extended to 110 countries worldwide.”

He also pointed out that all kinds of relief work are carried out by the organization’s volunteers. “Its focus is two-pronged: … disaster relief, which includes emergency aid and the dispatch of search and rescue teams and … long-term infrastructure construction, such as homes, hospitals, schools and health facilities.”

“It has arranged vocational training like sewing and bread-baking in Darfur. Empowered individuals are then taught to market their products to local people. It has built four hospitals in four African countries. In Punjab it has built an entire district comprising 300 homes, mosques, a school and shopping mall,” he said.

He also expressed the educational aims of the organization: “Education is hugely important. Last year, it gave financial assistance to 1,783 Turkish and foreign students. More than one-sixth of its $300 million budget is earmarked for education.”

“It has invested $700,000 in rescue equipment. Huge stocks of food packages for victims and rescue teams, which are accurately detailed, together with tents and furniture are neatly arranged in that warehouse,” he added.

He concluded: “Finally, Kimse Yok Mu has a multi-faceted approach to fundraising. Donations can be made via bank [transfer], online, telephone and text message. We felt inspired and humbled by our visit. It will be to [our] mutual benefit if some South African relief organizations could have close working relations with Kimse Yok Mu.”