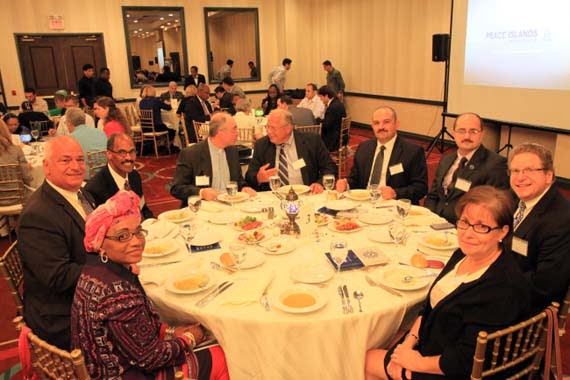 New Jersey’s Bergen County Sheriff Michael Saudino had been fasting for the first time when attended the iftar dinner by the Peace Islands Institute (PII). At the gathering with the theme “Understanding hunger and poverty by fasting,” Saudino was trying to empathize with the young Muslim who fulfilled the tough 15-day physical activities of the police academy drafts under the hot sun, though he was fasting at the same time. “I was very much impressed with the young man’s determination and reverence for fasting,” Saudino said and further revealed that he was too fasting for the first time in his life in the young man’s honor. In his address to the guests, Saudino proudly announced he successfully fulfilled his first fast.

“Gulen is seriously needed for a better world”

Noting that he has been watching PII activities in admiration, the prominent Sheriff Saudino went on to say, “I’ve read many of PII Honorary President Fethullah Gulen’s books. I’m very much inspired by his words. He is such a great person. People like Gulen is seriously needed for the world to become a better place.”

In addition to Sheriff Saudino, over two hundred guests from diverse faiths, culture and nations attended the iftar dinner held at Morristown Hyatt Hotel, NJ. The event, which was hosted by Imam W. Deen Shareef from Irvington Waarith ud Deen Masjid, started off with the opening speech by PII President, Ercan Tozan. Having made an introduction with his childhood Ramadan memories, Tozan further noted PII aims to serve unity and solidarity in the society. He stated that they are happy to bring together people from diverse walks of life and that take great pleasure in facilitating new friendships.

Iftar bridge extending from the US to Africa

Speaking of the social significance of Ramadan, Tozan said everyone, both on a personal and societal level, benefits Ramadan in many different ways. He conveyed that this special period of time enables individuals to listen to themselves and spiritually grow. He moreover underscored that iftars and tarawih (additional congregational prayer special to Ramadan) strengthen friendship ties in society by bringing people together.

Calling the attentions to the fact that another child dies every 6 minutes due to undernourishment and deficient health service in Africa according to UN reports, aid campaigns are being held currently through iftar events both in Turkey and the US to provide iftar meals to countries such as Somalia, Ethiopia and Kenya. He encouraged those willing to contribute to participate in iftar dinners in Africa through Helping Hands Relief Foundation. Tozan next invited the guest to exchange ideas on what projects can be initiated to better contribute the society

Fasting in the three Abrahamic religions

Following Tozan’s address, Rabbi Donald Rossoff, Rev. Jeff Markay and PII member Harun Alacadag spoke on significance and role of fasting in Judaism, Christianity and Islam respectively. Though its practice varies, the consensus in the speeches was that fasting in each religion is inherently a purification and spiritual deepening by pulling away from ego and setting out on an inner journey. In addition, it was pointed out that fasting is not all about abstaining from eating or drinking and that it is crucial for a person to control and better himself in every sense.

Qanun (Turkish zither) performance by Imran Baysal accompanied the dinner kicked off with Vedat Bayraktar’s adhan (call to prayer). A clip on Ramadan in Turkey and around the world was played along as the guest had their dinner.

US Attorney Paul Fishman: PII serves a significant cause regarding unity and cohesion in the society with its cultural and religious activities. Here today, we’ve had the opportunity to share not only our bread and water but also feelings and thoughts, above all.

Outreach coordinator at US Attorney’s Office Mikie Sherill: “PII has a special role in attaining unity among the pluralist American society. We are too happy to be a part of this service by contributing to PII projects.”

Director of the New Jersey Office of Homeland Security and Preparedness (OHSP), Ed Dickson: “I’ve been watching every project PII carries out with excitement. I was invited to several other events tonight but I preferred being here as a part of this distinguished community. I am happy to be a part of this beautiful night.”