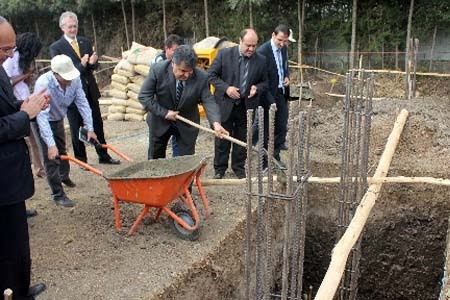 In addition to Turkish businessmen residents of Ethiopia, Turkish Ambassador to Addis Ababa Kenan Ipek was in attendance at the ceremony. Ipek said “What distinguishes us from other nations is that we do not seek self-interest but sharing, just like what we witness here today.”

The ground breaking of the building followed the remarks. Afterwards, Ambassador Ipek planted a tree in the soon-to-be dormitory’s yard. The construction financed by Turkish businessmen and entirely supervised by Turkish engineers is planned to be completed by July 2013.

Chief Minister of the province Balochistan, Pakistan, Abdul Malik Baloch received a delegation of Pak-Turk Schools’ and several other affiliated institutions’ officials at his residential office.

SULTAN FAIZY, HERAT The second high school for girls built by Turks in Afghanistan recently opened its doors following an official ceremony. The school, built in Herat, is a continuation of benevolent Turks’ efforts to invest in Afghanistan’s future through building schools countrywide. The first such school was opened in Kabul. The opening ceremony was […]