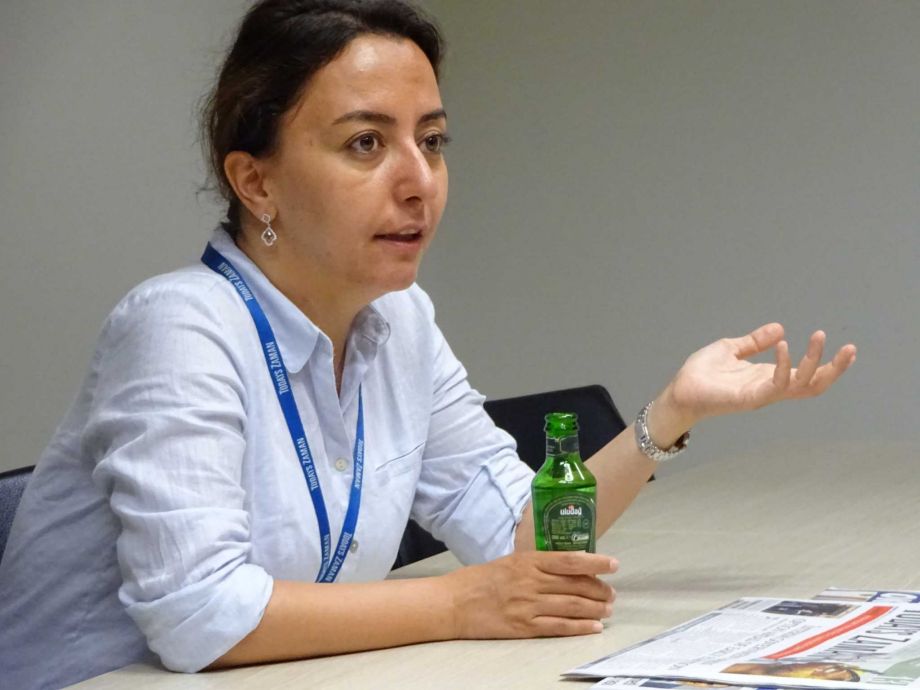 Sevgi Akarcesme, a columnist for Today's Zaman newspaper in Turkey, has been under pressure by the Erdogan regime for her tweets and articles critical of the Erdogan government. (Paul Grondahl / Times Union)

She tweeted remarks critical of the government to her 96,000 Twitter followers.

In addition, editor-in-chief Ekrem Dumanli was arrested on Dec. 14, 2014, as “an enemy of the state” as a result of his paper’s investigative coverage of President Recep Tayyip Erdogan’s strong-arm tactics and allegations of widespread government corruption.

“Every society pays a price for democracy,” she said. “We’re a latecomer to that process. I’m finding it a grim and depressing situation.”

Besides the editor’s arrest and numerous lawsuits against its journalists, Today’s Zaman has lost 50 percent of its advertising revenue in 2015 as a result of government pressure against advertisers.

“The threat is very real,” said Fatih Cicen, international coordinator of the Turkish Review, a bimonthly magazine of political analysis and opinion similar to Foreign Affairs that is published by Today’s Zaman.

The privately held Zaman Media Group is led by 10 wealthy shareholders and includes a TV station, news agency and about 1,000 employees across Turkey. The owners have not yet resorted to layoffs or cutbacks in the wake of plummeting revenue.

After she earned a master’s degree in political science from Temple in Philadelphia, Akarcesme worked at the Center for Strategic and International Studies in Washington before returning to Turkey to work in the Turkish government.

“I spent years defending Erdogan,” she said. “I admit now that I was wrong about him. I have watched his regime become more and more authoritarian over the last 10 years.”

Akarcesme could no longer serve as an Erdogan apologist while the president and his cronies “created the greatest network of corruption in Turkish history.”

She quit her government job and became a newspaper columnist. She was sued by Prime Minister Ahmet Davutoglu for critical tweets.

The president routinely blasts Today’s Zaman — which publishes editions in English and Turkish and boasts the nation’s highest circulation at 800,000 — as “blood-sucking leeches” and in league with the CIA and Mossad, Israel’s intelligence organization.

“I’ve lost all my old friends in the government,” Akarcesme said. “They’re afraid to talk to me.”

She and other Today’s Zaman journalists are banned from covering Erdogan’s speeches and other official government press conferences.

The Erdogan regime —which has sought to retain its iron grip through state-run media, intimidation and the specter of imprisonment — has been trampling the tenets of a free and open society guaranteed under the republic’s constitution.

The U.S. State Department raised concerns about the arrests last December in the crackdown on opposition media, including detaining 32 people with ties to a faith-based movement known as Hizmet. The movement is based on the writings of Muslim cleric, teacher and social activist Fethullah Gulen, 77, a former government ally who clashed with Erdogan and now lives in self-imposed exile in Saylorsburg, Pa. Erdogan’s government accused Gulen’s followers of orchestrating an alleged plot to try to bring it down by fomenting a 2013 government corruption investigation that forced four Cabinet ministers to resign.

The Turkish Center of Albany and more than a dozen like it in cities across New York and the U.S. are affiliated with the Hizmet movement, which operates more than 2,000 schools and 30 colleges across Turkey and in several other countries. The global Hizmet movement seeks to promote tolerance, service to humanity and improved educational opportunities.

In Ankara, we drove past the most glaring example of what Hizmet is battling: a 1,000-room presidential palace that Erdogan built on a forested hilltop he cleared for what he dubbed Ak Saray, or White Palace. It will cost more than $615 million, nearly twice the original estimate, and is bigger than the White House in Washington, the Palace of Versailles outside Paris and the Kremlin in Moscow.

It is a gaudy, sprawling 40-acre monument to unrestrained power.

For his palace, Erdogan cut down hundreds of trees in a forest reserve bequeathed to the nation by modern Turkey’s founding father, Mustafa Kemal Ataturk. The palace’s landscaping included thousands of imported Italian trees at an average cost of $5,000 each. Erdogan moved in last August while construction continues. Erdogan also recently ordered a new Airbus A330-200 presidential jet at a cost of $185 million.

Since his election in 2002, Erdogan consolidated power through his ruling Islamist-based Justice and Development Party, or A.K.P., which has dominated Turkish politics for more than a decade.

Under Erdogan, Turkey ranks 154th out of 180 countries evaluated for their press freedom, according to the media watchdog group Reporters Without Borders.
More than 80 percent of Turkey’s 75 million citizens get their news and information from state-run television, which Erdogan exploits as a personal propaganda machine. About 15 percent get their news from newspapers and roughly 5 percent from social media, according to a recent survey.

“This is a very critical period for press freedoms and the future of Turkey. We’re very concerned about the country slipping backward,” said Fatih Ceran, a spokesman for The Journalists and Writers Foundation, a not-for-profit organization founded in 1994 that organizes events to promote peace. It is affiliated with Hizmet and Gulen is the group’s honorary president.

“We believe tolerance and understanding is stronger than prejudice,” said Ceran. The group publishes books through its Tolerance Press.

On Tuesday morning last week, as we toured the gleaming, state-of-the-art newspaper offices, Akarcesme sighed heavily. She had dark circles under her eyes and conceded she has not been sleeping well and is fighting burnout.

“My mother is worried and has been sending me texts asking me to stop doing this,” the columnist said.

I posed for a picture with Akarcesme in front of a wall-sized photograph of hundreds of protesters who demonstrated outside the newspaper office after the Dec. 14, 2014, arrest of its editor.

The group chanted in Turkish, Ozgur Basin Susmaz “Free Media Can Not Be Silenced.”

Akarcesme seemed to stand a little taller beside the photograph.

“I will not give up,” she said. “I will stand by my principles. We owe that to our readers.”