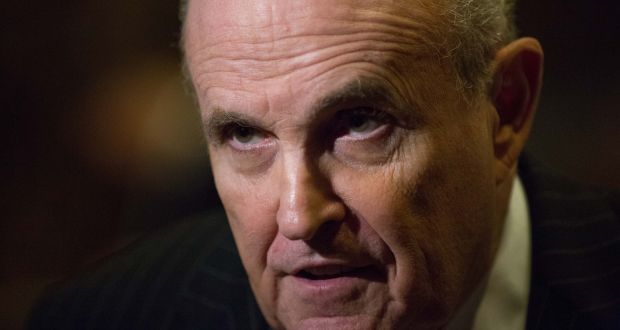 Rudolph W. Giuliani privately urged President Trump in 2017 to extradite a Turkish cleric living in exile in the United States, a top priority of Turkish President Recep Tayyip Erdogan, according to multiple former administration officials familiar with the discussions.

Giuliani, a Trump ally who later became the president’s personal attorney, repeatedly argued to Trump that the U.S. government should eject Fethullah Gulen from the country, according to the former officials, who spoke on the condition on anonymity to describe private conversations.

Turkey has demanded that the United States turn over Gulen, a permanent U.S. resident who lives in Pennsylvania, to stand trial on charges of plotting a 2016 coup attempt against Erdogan. Gulen has denied involvement in the plot.

Giuliani is now under scrutiny for his efforts to pressure Ukraine to investigate Trump’s political rivals. His earlier attempts to persuade the president to turn over the Turkish cleric represent another instance in which he appears to have been pushing a shadow foreign policy from his perch outside government.

The former New York mayor brought up Gulen so frequently with Trump during visits to the White House that one former official described the subject as Giuliani’s “hobby horse.” He was so focused on the issue — “it was all Gulen,” recalled a second former official — that White House aides worried that Giuliani was making the case on behalf of the Turkish government, former officials said.

“We’re not going to arrest [Gulen] to do a solid for Erdogan,” the second official said, describing the internal thinking.

However, Trump appeared receptive to the idea, pressing his advisers about Gulen’s status, the people said.

One former senior administration official recalled that Trump asked frequently about why Gulen couldn’t be turned over to Turkey, referring to Erdogan as “my friend.”

Administration officials were overwhelmingly opposed to the idea and told the president that the move could violate the legal process and damage him politically.

White House officials did not respond to requests for comment.

It’s unclear why Giuliani was championing a cause of such high importance to Erdogan — one the Turkish president personally raised with both the Obama administration and Trump. In 2017, Giuliani unsuccessfully pressed then-Secretary of State Rex Tillerson to help on another matter important to Erdogan: helping stop the U.S. prosecution of a Turkish Iranian trader, The Washington Post reported last week.

Giuliani is not registered as a foreign lobbyist, as he would be required to do if he were being paid to lobby the U.S. government on a policy matter for a foreign interest.

Giuliani told The Post in a phone interview late Monday that he never represented Turkey and so he does not need to register as a foreign lobbyist.

In a text exchange Tuesday afternoon, he declined to discuss whether he advocated for Gulen’s extradition, writing: “can’t comment on it that would be complete attorney client privilege but sounds wacky.”

When told that multiple people described the conversations to The Post, Giuliani responded “Bull,” and then liked the question with a thumbs-up emoji.

He did not return phone messages or respond to follow-up questions, except to add in a text that he “will not participate in an illegitimate, unconstitutional, and baseless ‘impeachment inquiry.’ ”

Federal investigators are examining Giuliani’s business dealings with two former associates who were arrested last week on campaign finance charges. A federal grand jury in New York has issued a subpoena to former GOP congressman Pete Sessions of Texas seeking records and other information on his interactions with Giuliani and his two associates. Giuliani has denied any wrongdoing.

In December, Trump told Erdogan his administration would take a look at Turkey’s extradition request, the White House said at the time. In January, a U.S. delegation met with Turkish officials to discuss the request, according to Turkish state media.

Giuliani’s conversations with Trump about Gulen came on the heels of a similar effort by Michael Flynn, Trump’s first national security adviser, and his then-associates to promote negative views of Gulen during the 2016 campaign and the presidential transition. “We should not provide him safe haven,” Flynn wrote in a November 2016 opinion piece.

Flynn admitted in December 2017 to lying about his contacts with the Russian ambassador and making false statements about work his consulting business did for Turkey. He has since argued in court that he is the victim of a government effort to smear him, although he has not withdrawn his guilty plea.

Reid Weingarten, an attorney for Gulen, said that he would find it disturbing if Giuliani was pressing for the cleric’s return to Turkey on the heels of Flynn’s efforts.

“We have argued aggressively and I thought persuasively to both the Obama and Trump Justice Departments that the allegations against Gulen are false and that any effort to extradite him would fail legally and factually and would be an embarrassment to the United States,” he said in a statement. “After Gen. Flynn’s efforts on behalf of Turkey on this subject were exposed it is hard to believe Giuliani would follow suit.”

Giuliani has had a wide range of foreign clients even as he serves as the president’s personal attorney. In interviews in recent months, Giuliani has acknowledged working with clients in Romania, Brazil, Bahrain, Colombia and Ukraine. He has represented an Iranian dissident group, once so controversial it was placed on the State Department list of terrorist organizations.

Giuliani has said that he does not need to register with the Justice Department for his overseas clients because he does not lobby U.S. officials on their behalf.

“I don’t represent foreign government in front of the U.S. government,” he told The Post earlier this year. “I’ve never registered to lobby.”

However, senior administration officials were so concerned that Giuliani might have been paid to push Turkey’s interests that, at one point in 2017, they confronted him and asked him not to bring up Turkish issues when he met with the president, according to a person familiar with the conversation.

When asked via text if he recalled the conversation, Giuliani responded by liking the question with a thumbs-up emoji.

Lobbying experts said that Giuliani’s private conversations with Trump about policy matters — including his push for Gulen’s extradition — could violate lobbying rules if he were pressing the matters on behalf of a foreign client.

In the case of the cleric, “the principal beneficiary of his work would be the Turkish government,” said Joshua Rosenstein, a Washington lawyer who specializes in foreign lobbying rules.

The conversations Giuliani reportedly had with Trump about Gulen in 2017 came the same year he was representing Reza Zarrab, a Turkish Iranian accused of corruption.

The trader held embarrassing and politically damaging information about Erdogan and other top Turkish officials in his government, it was later revealed in federal court when Zarrab pleaded guilty to orchestrating a multibillion-dollar conspiracy to evade U.S. sanctions against Iran.

Erdogan had repeatedly lobbied Trump to release Zarrab, both in personal meetings and calls in the spring and summer of 2017, according to multiple administration officials and Erdogan himself. The Turkish president claimed publicly that Zarrab, charged in a conspiracy to violate U.S. sanctions against Iran, was a political “hostage” of American law enforcement.

Giuliani joined Zarrab’s legal team in March 2017 and flew to Turkey in late February to meet with Erdogan to discuss a possible “state-to-state resolution in this case,” according to court filings in the Zarrab case.

In affidavits filed in federal court, Giuliani said that “at no time” he had “been involved in the representation of the Republic of Turkey” or acted as the country’s agent.

He acknowledged that his law firm did work for the Turkish government but said he was walled off from such discussions.

“Neither [my associate] nor I represent the interests of Turkey or the United States,” Giuliani said in a May 2017 affidavit.

However, lobbying experts said that his conversations with Trump and Tillerson to change U.S. policy on behalf of Zarrab, a foreign client, raised questions about why he did not register as a foreign lobbyist.

“It seems Giuliani was acting on behalf of a foreign principal and representing those interests before a U.S. government official, which can trigger the registration requirement,” said Matthew Sanderson, a Washington attorney who focuses on foreign lobbying registration.

Giuliani maintained in an interview Monday that such registration was unnecessary.

Complaints about his foreign clients are “diversions by Democrats hoping to shoot the messenger,” Giuliani said earlier this month.

Calling for an international probe into the accusation, Gulen told ZDF that he would be ready to answer to such an investigation. “If their accusations stand, then I will accept what they want. But they have neither succeeded in showing any concrete proof nor given an answer to my suggestion. Therefore, these are all just mere assertions,” he said.