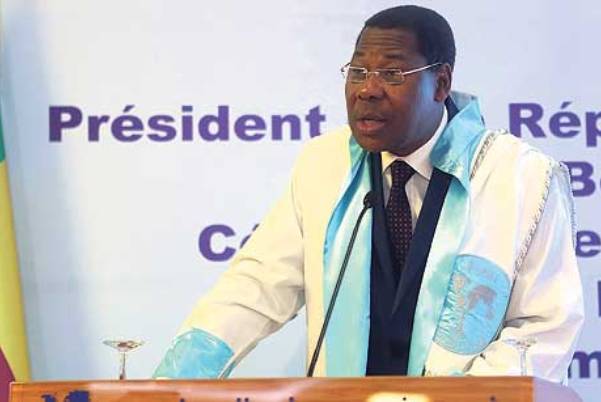 Since Turkey kicked off a strategic initiative to improve its commercial relations with Africa in 2003, this extra attention has resulted in an increased trade volume with the continent.

Beninese President Thomas Yayi Boni said Africa also sees Turkey from a strategic perspective, noting that Turkey is one of Benin’s high-priority partners. Turkey’s economy ranks 16th in the world and sixth in Europe, it is part of the European political stage and it also has an effective presence on the global stage, he said, going on to underline that it is imperative for Turkey to strengthen its relations with Africa in order to consolidate and increase its own power.

Speaking to Today’s Zaman in İstanbul on Thursday evening, Boni said Benin and Turkey share the same vision of the African continent as the cradle of civilization, but this still needs to be heeded globally in terms of politics and economy. The whole continent is in a phase of new development and Benin is no exception, Boni asserted, calling on Turkish businesspeople to come and participate in this growth.

Noting that this is his third visit to Turkey since he was elected president, Boni explained that he believes there are lessons to be learned from developing countries about business management and productivity, and Turkey is a good model in that sense. “Benin needs development, and Turkey seems to be a pole of the world’s growth,” he said, adding that his visits also aim to create a structure of mutual relations.

The strategic partnership between Turkey and Benin dates back to 2008, Boni noted. “But we have progressed really fast. Turkey has been very friendly to us and a baby was born out of this friendship. But it has grown so big [in such a short time] that it is as if it was born with teeth,” he said.

The president said the talks with Turkish officials have been very fruitful, resulting in a number of cooperation agreements in the fields of health, medical science, reciprocal protection, the promotion of investments and reciprocal visa exemptions for those holding diplomatic passports. Also, the two sides held discussions on the prospect of opening a Turkish embassy in Benin, Boni added. The talks included a number of incentives in terms of agricultural investment, he said, adding that the Turkish Cooperation and Development Agency (TİKA) will also come to Benin to seek ways to deepen this partnership. Boni explained that Prime Minister Recep Tayyip Erdoğan had promised to begin his next African visit in Benin, saying that “this would be a gift for the Beninese people.”

The second day of the president’s trip included meetings with the Turkish business world. He attended the Turkey-Benin Trade and Investment Forum, organized by the Turkish Confederation of Businessmen and Industrialists (TUSKON) in İstanbul. During the forum, businessmen from both countries held talks on investment and trade opportunities, forming what Boni called “a win-win situation.” Such opportunities will increase the prosperity of the Beninese people, the president added.

No deal yet with MNG on $300 million dam

Benin has been in talks with Turkey’s MNG Holding about the construction of the country’s first hydroelectric power plant since the foundation of the African republic. The project is projected to cost $300 million and will have an established capacity of 150 megawatts. Boni said the negotiations have been quite productive and the main points of the agreement have been agreed on, but the two sides are yet to sign the deal. “Let me take this opportunity to convey my thanks to the chairman of MNG, who really is a perfect investor and has a great love for Africa and Benin,” Boni said. The power plant will probably be contracted out on a build-operate-transfer basis, but all the details will be clarified when they gather again to settle the remaining issues. The president stated that he hoped this would occur before Jan. 15, 2014. Boni explained that his country needs energy, “without which development is not possible.”

Boni did not hesitate to express his love for Turkey, joking, “Every time I come to Turkey, I say to myself, ‘I wish I won’t return.’ But then it will be a problem for the Beninese, since they will have to elect a new president.”