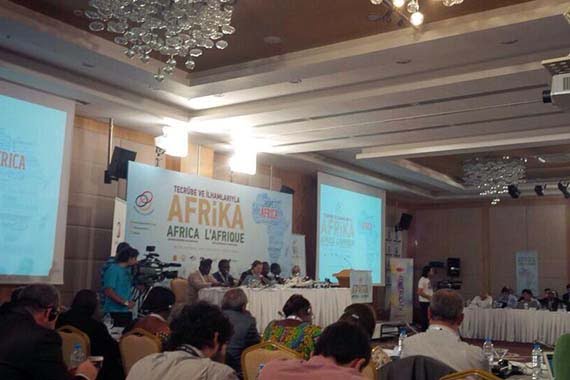 While the fight against the long-persisting health problems continues, the African continent has eventually witnessed a change for the better. In this regard, the eight Millennium Development Goals established by UN in 2000 consist of three relevant chapters, namely, reducing child mortality rates, improving maternal health and combatting epidemics including HIV/AIDS, malaria, and tuberculosis.

The efforts made towards the target chapters to date and findings in 2013 UN Development Program report have indicated an upturn particularly in Africa.

Thanks to the recovery initiatives in Africa, maternal mortality decreased by 42% between 1990 and 2010 and under 5 child mortality by 47% over the same period. As for the epidemics, particularly in HIV diagnosis, transmission rate decreased from 5.9% to 4.9% between 2001 and 2011. And although malaria and tuberculosis still pose a threat to the continent, curbing their spread across the continent yielded a decrease in the mortality rate caused by these two epidemics.

Despite the positive turn in the continent, the targeted solution to health problems has not been achieved yet. Due to continent-wide poor living conditions, 32% of the population is suffering from severe cataract. Moreover, due to again poor conditions, undernourishment and such approximately 60% of the child population is suffering from frequent occurrence of umbilical hernia and uraniscochasma incidents.

Improvement of sanitation services and water wells established over the recent years by NGOs -such as Kimse Yok Mu- from countries all over the world including Turkey have contributed to the continent-wide recovery in Africa stricken with draught and health problems.

Such aid organizations including Kimse Yok Mu (KYM) still continue to support the African countries considerably in the way of recovery, by building hospitals and water wells, with volunteer doctors performing health screenings and cataract surgery in areas where it’s seriously needed, and by providing medical equipment and food aid.

Kimse Yok Mu Foundation -which operates through 41 chapters and humanitarian aid projects in 97 countries worldwide- in cooperation with Office of Prime Minister, Ministry of Health and TIKA (Turkey International Cooperation and Development Agency), carries on with various aid activities across the African continent. The activities are reinforced with emergency aid campaigns and project targeting sustainable development goals. The hospitals, schools, dormitory, soup kitchens, water wells and orphanages by KYM can be listed as examples of these initiatives.

Continent-wide deficiency of infrastructure and sewage treatment system -two indispensable prerequisites of a healthy living condition-, life threatening levels of polluted water in countries with drinking water systems, over-polluted waterholes, cesspools resulting in occurrence of epidemics such as malaria and many more call attentions to the need for water wells and sanitation service to provide clean drinking water, in particular, to the region.

As is known, over 2 million people around the world do not have access to sufficient and safe drinking water while 2.5 million have to survive unhygienic conditions. If the current trends continue, two-thirds of the world population is predicted to face a severe water scarcity by 2025. The Northern Africa and Middle East are reported to be the regions likely to suffer most. The cities particularly in these two regions are already faced with an increasing demand for water and sanitation services due to fast urbanization pace.

Through the permanent projects conducted by Kimse Yok Mu Foundation, a total of 383 water wells have been made available to the locals in nine countries over a 18-month period. Additionally, 109 water well projects in 5 different countries are well underway.

To date, a total of 64 medical screenings in seven countries in need have been performed across Africa by 350 volunteer doctors and supporting medical professionals from Turkey.

The foundation is organizing cataract campaigns across the continent in general and equatorial zone in particular. 13,841 cataract sufferers to date have restored their eyesight through the cataract surgeries in Sudan, Chad, Kameron, Niger and Central African Republic. In addition, the groundwork for future cataract campaigns in Mali, Burkina Faso, Ghana, Benin, Togo and Sierra Leone is underway. The campaigns are planned to launch by the end of the year.

The ongoing hospital constructions in Somalia, Uganda, Ethiopia and Kenya can be listed as the most typical examples of the foundation’s sustainable development projects which are aimed at fulfilling the medical needs. The hospitals underway in four different countries will be equipped with 35 beds, 2 operation theatres, 2 delivery rooms, 1 intensive care and newborn unit, 12 outpatient service rooms, radiology service and labs.

Radiology departments of all the hospitals will offer tomography, X-ray and ultrasound scans while the labs provide blood, urinary, hormone and pathology tests. Besides, the hospitals aim to meet qualified staff shortage in healthcare across the continent by training local doctors and medical staff in respective departments. 35 medical professionals from Somalia and Sudan to date have received three to five months of practical trainings in ophthalmology, general surgery, gynecology and delivery, otorhinolaryngology and laboratory departments of medical schools and training/research hospitals in Turkey. The staff to be employed at all the hospitals will receive training in any department needed.

Such positive and promising medical developments in Africa will achieve even better results with ever-growing cooperation and joint projects from international aid organizations, NGOs and locals, and thus reducing the health problems to minimum.

Attainment and sustainability of these projects will be possible only through cooperation of dependable partners in Africa. Kimse Yok Mu cooperates with local administrations and authorities besides NGOs in order to be able to benefit the region more. It is of great importance that such partnerships increasingly continue for the initiatives to grow and be more effective.

It is KYM’s hope that through all these initiatives and efforts carried out with contributions from local administrations and authorities, all troubles of the African people will yield to a bright future.