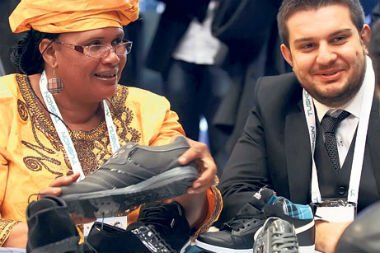 As part of Friday’s event, Turkish entrepreneurs met with their counterparts from nearly 60 countries in Africa to discuss possible business opportunities.

Pedro Bayeme Bayeme Ayingano Guine,  from Equatorial Guinea, says,  “A Turkish construction company built the largest convention center in our country and there is a Turkish school which provides quality education. … TUSKON also is a bridge between us and Turkey… We are keen to engaging in partnerships with Turkish firms.”

The TUSKON event brought together 350 African businessmen from 54 African countries and 600 Turkish company representatives to discuss joint investments on the sidelines of the TATK-7 on Friday in İstanbul’s Cevahir Hotel. The participants are expected to have 10,000 business meetings. “There is potential for particularly construction and infrastructure investments in Africa for Turkish firms. … In addition to these sectors we have to attract Turkish investments to such promising fields as automotive, food, furniture and home textiles in Africa,” Ciğer noted.

Underlining that each country has its specific investment priorities in Africa, Ciğer said Turkish firms should seek and follow investment opportunities in different markets separately. He said Turkey’s exports to Africa increased to more than $10 billion this year, up from $3 billion. Turkey’s mutual trade volume with Africa is expected to hit $15 billion this year. Underlining that Turkey has gained remarkable experience in manufacturing, particularly in industry, Ciğer said TUSKON works to make sure African businessmen do not to miss this opportunity to share their experiences with Turkish firms. “We call on African entrepreneurs to engage in more projects than they currently do with Turkish counterparts, Ciğer said separately in his address at the opening session of the event. Ciğer said Turkey-Africa trade bridges — the first of which was organized in 2006 — helped create a total trade volume of $25 billion between Turkey and the entire continent.

Also delivering a speech at the event, Turkish Exporters Assembly (TİM) head Mehmet Büyükekşi said the TUSKON’s program is expected to bring benefits to both sides. “Turkey’s foreign trade potential is now larger than it has ever been. We are expecting to reach a total trade volume of $385 billion with $135 billion of its exports this year. … This will surely reflect on trade relations with Africa,” he opined.

As they laud the impressive growth of the Turkish economy in the past decade, African businessmen at Friday’s event say they are expecting to see more Turkish companies engage in new projects in Africa. The continent’s entrepreneurs place importance on diversifying their foreign partners and Turkey has a prominent place in this regard.

Stephen A. Arhing, the executive director of SAASCO, a real estate and construction firm from Ghana, tells Today’s Zaman that they normally receive products from Italy but have recently realized that Turkish products are relatively better in quality. “Before we came into contact with TUSKON we had very limited knowledge about Turkey’s potential. … Having studied Turkish markets in the past few months I realized that some of the products we bought from Italy were originally produced in Turkey.” Arhing’s company is one of the largest construction firms in Ghana and he says they have some large-size projects to finalize in the coming months. Arhing says he looked for a Turkish partner to jointly construct a shopping mall in his country. “Ghana receives construction materials with an average value of $200 million per year and Turkey should have its share in this market,” he concluded.

Djibril Beye, the director of the Senegal-Turkey Businessmen Association says Turkish investors should not lose time to enter the Senegalese markets, underlining that there are “serious tenders for large investments.” There is a dam construction project with a total investment size of $1 billion and it is planned to be finalized by 2014. … Also a tender for the construction of a 250 megawatts coal energy production facility will be held in early January.” Beye called on Turkish firms to exert more efforts to study the African markets in detail. “They should not sit and wait for the projects come to them but seek opportunities in the first place. … China, France and the UK are doing this so why not [the] Turks?” he opined.

Abdelillah Elbassim, the head of Morocco’s Takbir Equipement Electriques et Mécanique (T.e.e.m) firms says they purchase 10 tons of electricity transmission wires from Italy and Spain per month, adding they could switch to Turkish providers. With an annual $10 million euro turnover, his company builds electricity distributions units in Morocco. They also buys and sell commercial vehicles to the market.

Nouereddine Lebbar, the head of Maferi, a company producing galvanize materials for waste disposal systems, says they are looking to purchase raw materials from Turkey. His company has 5 million euros in annual turnover. Lebbar says he has met with two Turkish companies so far and expects bilateral talks will “yield fruitful results.” “Spain is the strongest rival in terms of our providers of Turkey. … We are trying to overcome such disadvantages as relatively higher transportation costs from Turkey.”

Pedro Bayeme Bayeme Ayingano Guine, the director of SONAPESCA, a state-led maritime union from Equatorial Guinea, says his participation in the event is proof that he is keen to see Turkish investments in his country. “A Turkish construction company built the largest convention center in our country and there is a Turkish school which provides quality education. … TUSKON also is a bridge between us and Turkey. I participate in this event because we are keen to engaging in partnerships with Turkish firms.”

President Jacob Zuma has urged the Turkish business people to partner with the Chambers of Commerce in South Africa to help develop small businesses, transfer skills and create black industrialists.

ÜNAL AYDIN President Abdullah Gül attended the inauguration of a Turkish school in Nairobi on Saturday, where he traveled last week to improve political and economic relations between Turkey and Africa. The inauguration of Işık Lisesi (Light High School), which accepted its first students last year, was attended by President Gül, his wife, Hayrünnisa, and […]