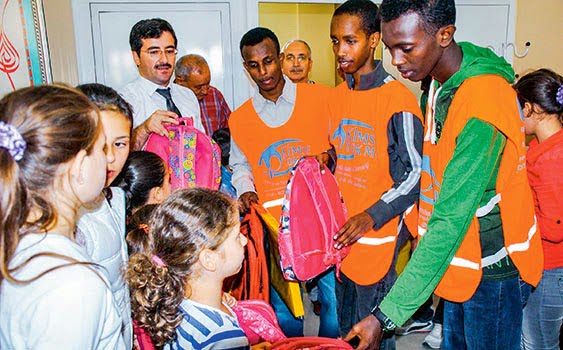 Appreciative of what the Soma locals have done for them since the day they arrived in the city, the Somali students in person handed the orphan their supplies at a ceremony held in KYM’s local chapter. The orphan students were overjoyed to see the donations. The foundation’s director for Manisa chapter Abdurrahman Avinc spoke on their efforts to heal the mining victims’ wounds. “We already paid the scholarships we earlier promised to these students as the academic year kicked off. And today, we are also giving away stationery supplies to 105 of them.”

The late miner Yuksel Cangul’s widow, Saniye Cangul, said those Somali students lifted up their orphans with their donations. “May Allah be pleased with them. They’ve cheered up our children. I’m lost for words. Words just fail me! It’s very considerate of them. Many thanks to all!”

Likewise, the recipient students said they very much liked the supplies. They thanked KYM and the Somali students for their assistance.