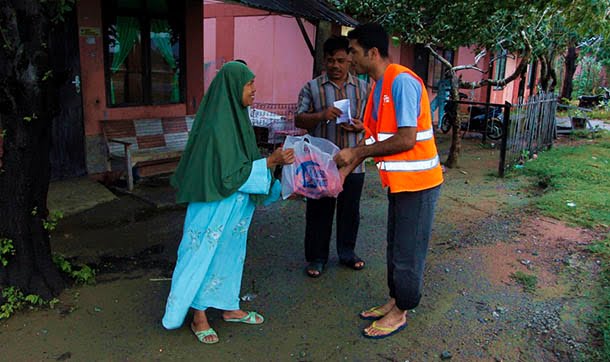 Officials of Bonita, a South Korean NGO that engages in research and efforts for children and labor rights, said they find it hard to make sense of the oppression against Kimse Yok Mu (KYM). The officials recently went to Aceh, Indonesia, to witness the KYM efforts during Eid al-Adha. The region had suffered most in the tsunami that hit the country in 2005.

The foundation’s co-chairs Yun Yelim and Gong Yunhee spoke to Cihan News Agency on their experiences with Kimse Yok Mu Foundation. Yun said he met KYM through his Turkish friends. He later searched the foundation’s eid activities online. “When we found out that they’ve been doing it annually around the world, we decided to join them in their meat donations in Aceh. I volunteered in meat handouts in Aceh working next to the KYM volunteers.”

”I was moved to learn about the scholarships for tsunami orphans”

Yun went on to say he was most moved by the educational assistance for the children tsunami left orphan. “I met a girl at the school there. She seemed to be very smart. I was told she’s been receiving scholarship, as she was an orphan. And that KYM found a custodial family for orphans like her. I was moved by all these efforts. We have a lot to learn from KYM.”

Likewise, Gong Yunhee said KYM differs from other charities in that it provides not only short-term but also long term aid and relief, including educational activities in the region.

Gong further commented on the Turkish govt’s oppression on KYM. Being personally involved in the foundation’s aid efforts, Yunhee said it’s hard to understand the attacks going on. “I don’t know the reason why the Turkish gov’t is doing it. But I believe KYM’s ongoing assistance programs following the tsunami should continue. I believe KYM should step up its efforts in South Korea too.”