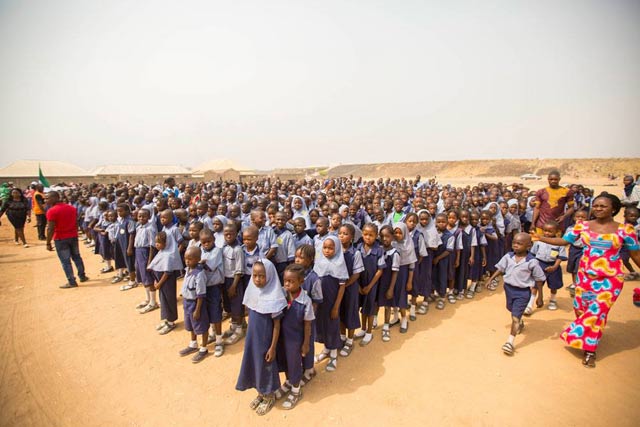 The authorities  and parents of Nigerian-Turkish International Colleges (NTIC), Lagos, Ogun branches have explained why the 17 schools Turkish President Recep Tayyip Erdogan requested Nigerian government to shut down cannot be closed.  They said the schools were run by Nigerians for Nigerians.

Erdogan had alleged that the leader of Hizmet Movement, Imam Fethullah Gulen, who  he alleged is  the mastermind of the attempted coup in Turkey, on July 15, owned  the 17 schools  in Nigeria and thus asked the Federal Government, through Turkey Ambassador to Nigeria, Hakan Gakil, to close them. Sunday Vanguard checks revealed that the Turkish president  actually requested 170 countries where the schools are established and run for the same favour, but  while only two, including Somalia, obliged on the grounds of  their indebtedness to Turkey,  the other countries have either refused or  are  undecided as they asked for  proof  of Erdogan’s claim.

Reacting, operators of the schools said  that while it was true that the Nigerian-Turkish institutions were not owned by the Turkish government, they were also  not  owned by the  Gulen-led Hizmet Movement although they may share in his philosophy as an Islamic cleric known for being an embodiment of peace both with government and with other people, be they Muslims or Christians  in Turkey or abroad.  They contended that Gulen’s philosophy of government was that it was better run with democracy than with military.

The operators explained that the role of the cleric in the restoration of democratic rule, after four different military coups, governments that ended 20 years ago in Turkey, could not be undermined by mere unsubstantiated allegation like the one levelled by Erdogan.

In an interview, on Friday, Principal of NTIC, Lagos, Ogun states branches, Mr. Yunus Emre Dogan- said, “We wonder what the happenings  in Turkey have  to do with schools that are 95 percent run by Nigerians and for Nigerians.  We are financed by people other than the alleged ownership by Hizmet Movement.   We started here in 1998.   Nigerians are with us and they are supporting us.   In Yobe, for instance, buildings were put up by people who believe in our philosophy and ability and those buildings were donated to us.   Two south western Nigerian governors have two children each with us making four.  Two have passed out to institutions of higher learning and the other governor still has his two children with us and we are duly registered in Nigeria by appropriate  authorities.   So, if we are of any bad habit or do  unclean business, are you saying that Nigeria has no capable intelligence to have detected all that since our inception in this country?

“But that is never our way because ours has been to solve the three problems of humanity with the instrumentality of moral and quality education, namely problem of ignorance, problem of disunity and problem of priority.   We opened  the schools to solve these problems and we are in five states of Nigeria, namely Kano, Kaduna, Yobe, Lagos and Ogun.   Our parents are our strength and now the parents are saying that, ‘no, these schools can’t be closed’ because they are not Turkish but theirs (Nigerians).   And I agree with them because all investments that we put on ground here under the First Surat Group of Companies Limited on profitless basis are basically in Nigeria run largely by Nigerians for Nigerians.

The Turkish president  actually requested 170 countries where the schools are established and run for the same favour, but  while only two, including Somalia, obliged on the grounds of  their indebtedness to Turkey,  the other countries have either refused or  are  undecided as they asked for  proof  of Erdogan’s claim.

“The schools are only named Turkish but in real sense are Nigerian run.   We are known in Nigeria as science school because out of seven gold medals Nigeria earned from science competitions abroad, five were won by students from this school.  So, we are representing Nigeria internationally and we prepare students for scholarship. “We give scholarship from JSS to SSS up to university level and find jobs for our scholars if, after graduation, they can’t find jobs  because much as we send them on scholarship abroad, we return them home to come and put their earned knowledge and experience abroad to develop their father land.” Dogan  added  that First Surat Group of Companies Limited, under its Group Managing Director, Mehmet Basturk, apart from NTIC, also runs Nigerian Turkish Nile University (NTNU), NTIC and NTNU Alumni Associations, Nigerian Turkish Nizamiye Hospital, NTIC Foundation and Surat Educational Limited, all of  which he said were run to put smiles on the faces of Nigerians.

Earlier in Abuja,  the NTIC,  in a statement by Orhan Kertim, the Managing Director, posted  on the school’s website, had described the call by the Turkish Ambassador to Nigeria, Gakil, for the closure of  the  schools  as “a spurious request.”

In a statement earlier, Gulen suggested the coup attempt could have been staged. Asked on “Fareed Zakaria GPS” if he thought Erdogan might have planned the coup, Gulen said he would “consider such a claim a slander.” He said, “I would submit myself to God before I make such an accusation, knowing I am accountable to God.”  In the CNN interview, Fethullah Gulen said, “If there is anything I told anyone about this verbally, if there is any phone conversation, if one-tenth of this accusation is correct … I would bend my neck and would say, ‘They are telling the truth. Let them take me away. Let them hang me.”

Sunday Vanguard checks revealed that President Muhammadu Buhari, like other world leaders in countries where such request was made for closure of schools run by Turkish nationals on this allegation, is undecided on the Istanbul’s request to close the 17 schools.  Special Adviser to the President on Media and Publicity, Mr. Femi Adesina, simply replied to a text message asking what the President’s decision was on the  Erdogan’s request thus:  “I have no information on it.  You may ask Foreign Affairs Ministry.”

Another report, however, has it that,  a former Nigerian ambassador, Suleiman Dahiru, had urged Nigerians to ignore the request of the Turkish government for the closure of  the institutions in Nigeria, describing as baseless, unfounded and unfortunate the request  even as Minister of State for Foreign Affairs, Hajia Abba Ibrahim, declined comments on the issue on the grounds that it was a purely diplomatic issue.