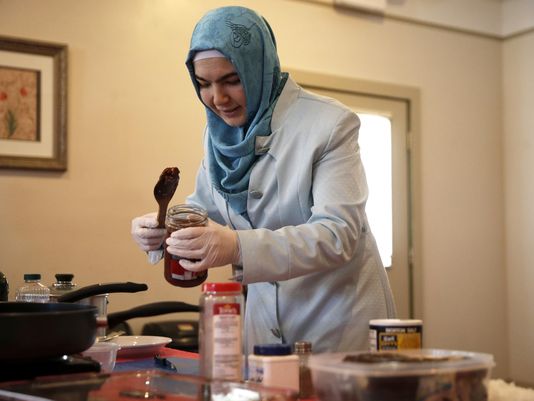 Esra Akbas demonstrates how to fill a stuffed eggplant, or Karniyarik, during a Turkish cooking class at the Istanbul Cultural Center on Sunday. (Photo: Joe Rondone/Democrat)

Leave your stereotypes at the door. Then close your eyes and listen to the conversation: “The baby didn’t sleep all night.” “In my recipe, we usually add a little more oil.” “My mother-in-law watches the children…” “I’ve a research paper due tomorrow by three…”

Now open your eyes and look around. The room at the Istanbul Cultural Center just off the FSU campus is filled with both men and women and lots and lots of children. Many of the women are wearing colorful headscarves and long buttoned coats. And most of the men are their husbands, some associated with the university as teachers or students, and others who have taken time away from their own professions in Turkey to accompany their wives who are completing graduate studies here.

With conversation akin to a ladies’ social club or perhaps the beginning of a church lunch, we are in fact at one of the many community outreach programs sponsored by the Istanbul Cultural Center — here, a cooking class that will end with participants sharing a meal and says, Director Ahmet Sodek, “…building bridges simply by getting to know each other on a personal basis.”

While Esra Aktas, a Ph.D. candidate in computer science, makes karniyarik, adding beef filling into tiny eggplants at the front of the room, a few Tallahassee locals are taking notes on ingredients. “Everyone is welcome at the center,” says Sodek. “It is part of Turkish culture to offer hospitality…we love having guests!”

The Tallahassee center, which was established by mostly graduate students who have leased the building and fund its activities, is part of the Istanbul Cultural Center of the Southeast. Jacksonville has an even larger organization with which the Tallahassee members collaborate. A Language and Cultural Festival will take place in Jacksonville at Jacoby Hall on May 14. The local group will take part.

But Sodek insists the Cultural Center is not just for Turkish nationals looking for a little ‘home’ while far away.

“Yes, we do have Turkish cooking classes because food is a great way to be welcomed into a culture, but our Turkish movies, language classes for both children and adults, and in the spring, pottery painting classes are also an invitation to others to join us.”

“The tulip is the symbol for God. Carnations are for the prophets,” he says. In Islam, representations of sentient beings is usually proscribed, but the geometric patterns and colors are ingenious and beautiful. “Using these same kinds of patterns, the women also have henna parties at the Center. They use the dye from the powdered leaves of the henna shrub to produce orange-colored patterns on the hands and feet. It is for woman only…” he laughs.

As the cooking class participants begin to drink their tea and eye some of the baklava, Sodek only briefly touches on the societal tensions that have recently arisen around Middle Eastern issues. Yet, he flatly says, “Muslims can’t be terrorists and terrorists can’t be Muslims. A true Muslim represents peace. To do otherwise you are not of this faith.” He says that though “religion is part of our culture,” he hopes the Center’s outreach will serve to dispel some misconceptions about Islam. “We live in the same world, the same cities and towns. We need to truly know each other.”

Meanwhile, Tallahassee locals and young Turkish mothers in their brilliant scarves are chatting over lunch, children toddling from lap to lap with tiny, flirtatious hand pats to grown-up knees. They are discussing how these youngsters will come to understand Turkish hospitality and manners.

“They will be taught to call grown-ups, “Abla and Abi” — “elder sister and elder brother.” It is a sign of respect. And when a guest comes to visit, “the younger children will stand by the door pouring scented water over the hands of the guest and the second child will offer a piece of candy—a way to offer a warm welcome.”

Though the afternoon’s repast was only a light lunch, Sodek, savoring a last sip of dark tea, takes a moment to describe his favorite Turkish culinary delights.

“We would start each evening meal with tea and a soup…lentil or tomato with yogurt and peppers, perhaps. Then maybe a kebob or doner in a wrap, like a gyro…again with yogurt, tomato paste, and spices. Beans, chickpeas, leeks, zucchini, and eggplant in various combinations would be there….and rice. Then, before dessert, we would have ayran, a kind of diluted yogurt drink with foam on top.”

Then Sodek seems to mentally close his eyes in bliss. “Desserts…well, my very favorites are mixtures of milk, sugar and cinnamon. I could put on 40 kilos in the blink of an eye with these…although I like another one called asure. It is made of nuts, dried vegetables, raisins and other dried fruits. It is all mixed together and we tell children it is like Noah’s Ark. We say that after everything was destroyed with the flood, what was left became mixed together…all starting over again. Maybe better than the way it was.”

And like asure, that is clearly Sodek’s hope and the reason for the Istanbul Cultural Center—to encourage the tasting of other’s cultures, a blending of thoughts, and with those good ingredients, a better outcome for each other’s lives.