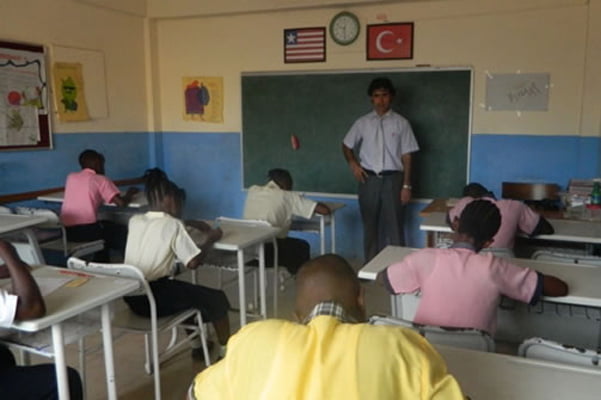 In an effort to promote students’ enthusiasm for mathematics and the sciences, the Liberian Turkish Light International School has launched a math competition for nearly 200 students in 150 elementary schools in Monrovia.

As well as presenting math as a useful tool in daily living, the event is further aimed at spotting math and science talent among the youth, fostering a healthy exchange of ideas and, thus, motivating young math wizzes to develop their talents and pursue their passion for higher learning.

Mr. Huseyin Fatih BABA, principal of the Liberian- Turkish school told reporters that the program was his institution’s contribution to building the educational system of Liberia.

BABA further announced that the top three competitors would walk away with cash prizes consisting of US$300 for first place, US$200 for second place, and US$100 for third place.

The principals of participating schools such as St. Peter’s Lutheran High School and the Victory Christian Academy made remarks at the launching of the competition.

Mr. Joe N. Siryee, headmaster of the Victory Christian Academy, expressed hopes that the move would help improve [the performance of] the country’s future generations in the area of science education.

St. Peter’s Francis Maweah Jr., for his part, commended the Turkish school’s administration for taking a step in the right direction. He further noted the science program is unique, and expressed hopes that the Liberian Turkish Light International School would, in the future, extend invitations to other students from the 15 counties.

“I am totally convinced,” he said, “that my two students will score high points in the test, because they are among the good students in the elementary division of the school and they know within themselves that they are here to represent the entire school.”

Mr. James P. David of the John Lewis Morris Memorial United Methodist School thanked the administration for their initiative, and proposed that junior and senior high school students be invited to participate in the competition. He lauded the program as an opportunity for elementary students to prepare for junior high school.

In response to remarks from his counterparts, Principal BABA of the Liberian Turkish Light International School commended the contestant schools for their participation, and urged them to continue working in the areas of education.