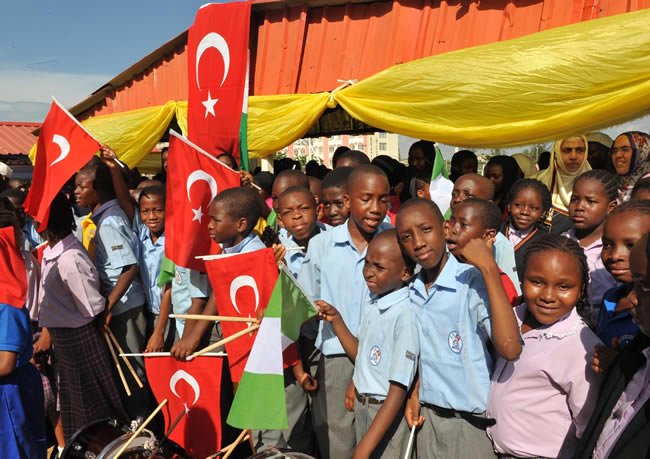 AS a Nigerian who has experienced Turks and their culture both at home and in Turkey for over a decade of my life, I have come to see and feel Turkey as my second country. My first interaction with the Turkish society was through education in Abuja at one of their many schools nationwide before I went on to spend five years in Istanbul.

One of the first things I discovered about Turkey is the booming economy. I witnessed development beautifully driven by individuals in the industrial sector, pushing relentlessly for the best output on global criteria. I felt so blessed to be part of this growth and experience Turkish work ethics first hand. Turks love to produce useful things of high quality; they love to boast of how much better their product or service is than China or how many big multinational brands outsource production to them.

Since I returned to Nigeria I have watched my second country from afar, experiencing joy when I see them make moves to reach out to other parts of the world and imprint their mark of excellence. As of recent, my feelings have turned sour from the negative and unpatriotic happenings in Turkey.

In order to grasp the scope of the bitterness I experience, one must know and understand the purpose of the Hizmet movement founded by Turkish intellectual scholar Fetullah Gulen. I define the Hizmet movement as a self-sufficient, non-profit oriented selfless ecosystem held together by an idea fostered by volunteers to touch lives on a global scale through education, charitable projects, dialogue, healthcare and general economic development.

Fetullah Gulen’s ideals are derived from Islamic teachings that promote education, enriching humanity’s welfare, dialogue and peaceful coexistence. It is through a widespread decision by many inspired Turks and Non-Turks to ‘serve’ this same idea that holds the hizmet movement together. The word Hizmet in Turkish directly translates to service. In this case, service is rendered to and for humanity with no strings attached. The only one string I have experienced in the hizmet movement is the unspoken request that as you have been served, make sure you serve too, so that the chain of goodness never ends; for those who have served you will come to pass. One must also take note that from the successful schools, hospitals, businesses and media outlets built in over 160 countries through donations from businesspeople and donors inspired by the hizmet movement; Mr Gulen doesn’t get a coin of profit.

Although Gulen started to promote his ideas in 1966, it wasn’t until 1980’s that they experienced substantial tangible growth as business owners he inspired responded to the educational crisis in Turkey at the time by building and sustaining student dormitories, organizing university entrance exam courses, teacher associations, publishing houses and starting up a journal. Schools that won medals in nationwide competitions also sprung, catching everyone’s attention and increasing the movement’s followership and trust. This later evolved to the building of more schools and hospitals in Turkey and overseas with the simple goal to serve humanity.

Without this movement, there wouldn’t have been a Turkish international college for me to attend, or a Turkish Nizamiye hospital for me to visit for world class health care. Nigerian Turkish Nile University in Abuja would also be a myth that my younger sister would only imagine enrolling and never actualise or conceptualise the dream of attending such an institution. There certainly wouldn’t be an Association of Business people and investors of Nigeria and Turkey to turn to for easy trade bridges.

Tayyip Erdogan, the current president of Turkey was in good relations with the hizmet movement until recent times when they chose the path of revealing truths of his suspicious dealings rather than being silent accomplices. Ever since, the relationship between Erdogan and the hizmet movement has gone sour. It especially took a turn for the worse when the 2014 money laundering scandal on shady real estate deals surfaced. He accused hizmet movement of influencing investigations by the police that lead to the discovery of millions of euros hidden in a Bank Chairman’s home among others. Telephone recordings of him directing his son to hide millions of dollars also surfaced to further smear his image. These occurrences which he blames on his new enemy, hizmet, convinced him to retaliate aggressively. His most recent move is the most unreasonable and disadvantageous yet.

President Erdogan is campaigning in Africa for the abolishment of all schools built by the hizmet movement by accusing them of promoting terrorist activities; if so, then why am I not a terrorist? Nigerian Turkish colleges, which I personally benefited from, falls under this category. On his recent trip to Ethiopia he encouraged authorities to close down these schools and made beautiful promises of opening new ones. There is a Gulen inspired school in every major country in Africa. Using Nigeria as a sample for my case, there are 16 schools in Nigeria alone.

If we put aside the effect such an act would have on the children who would lose an opportunity to get quality education, how about the hundreds or thousands of staff that will lose their jobs? And if we put jobs aside, how about the local business people who would lose their very good customers? The people who sell meat to the schools, the electricity and diesel they use daily, the spending by the Turkish staff on local products and even further investments by the schools would be lost.

Such an option would not just be a nationwide educational setback but also an economic disaster on a large scale. I avoid political affairs that do not affect me directly, but this matter is one I had to speak out about. The children in Africa who are in dire need of sound education should not be collateral damage in Erdogan’s political war with the hizmet movement. This would be the birth of educational refugees; I believe the Syrian refugees are already a handful for Mr President.