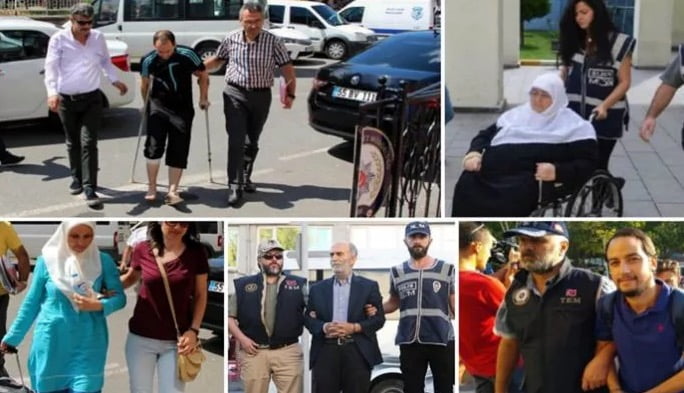 Photos of the individuals arrested and detained. Source: Turkish Minute.

The purges continue unabated in Turkey. On Friday, 218 individuals were arrested on charges of being members of a terrorist organization. Another 421 were detained.

These arrests and detentions took place more than 6 weeks after the Turkish military staged a failed coup. In the meantime, not only the military officers responsible for the coup have been arrested, but the same goes for many others: people who had absolutely nothing to do with the coup, but who are simply accused of sympathizing with Fethullah Gülen, the Islamic scholar Turkey says masterminded the coup.

In what’s becoming a repetitive story, a host of journalists, lawyers, teachers and civil servants were among those arrested by the authorities.

Fatih Tezcan, a pro-government columnist, said in a video that he is sure the Turkish state had embedded a secret agent in the Gülen movement and that now it is time for him to “terminate” Turkish Islamic scholar Fethullah Gülen. During his 1.08-minute video, Tezcan curses the Gülen movement and the US-based Gülen and says that the murder of Gülen is something desired by the entire Muslim world.

The tension caused by a Supreme Board of Judges and Prosecutors (HSYK) bill that is designed to restructure the HSYJ, the witch-hunts against police officers, teachers and other public employees who have been profiled as members of the Hizmet community (Gülen movement) and the victimization of tens of thousands of people have created unease among the general public. People started reacting negatively to the accusations and slander, which went far beyond the limits of criticism against the Hizmet community, and started saying: “This is too much!