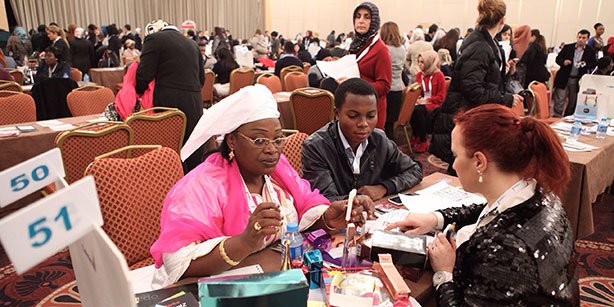 “The Gülen movement has been crucial in expanding Turkey’s profile in Africa, and the high-profile falling-out between the AKP [AK Party] and the Gülenists significantly complicates the future of relations in the NGO sphere – and could prove detrimental for further Turkish engagement in SSA,” said the report.

The report highlights how the Gülen movement, also known as the Hizmet movement, has played an important role in fostering Turkey’s presence in SSA with its activities in various fields, yet stresses that Gülen-affiliated organizations in the region are facing obstruction from the AK Party government. The movement is inspired by Turkish-Islamic scholar Fethullah Gülen, who currently lives in self-imposed exile in the US.

“Organizations linked to Fethullah Gülen have found their operations under increasing pressure from the AKP government following the rift between [President Recep Tayyip] Erdoğan and his former ally – although some African governments have apparently resisted pressure from Ankara to close down Gülenist-run schools,” the report said.

The rift between the AK Party government and the Gülen movement was sparked mainly by a major corruption probe that became public on Dec. 17, 2013 in which senior members of then-Prime Minister Erdoğan’s AK Party government were implicated. There were also corruption allegations about Erdoğan himself and his son.

However, Erdoğan described the investigation as a “coup” attempt and accusing the Gülen movement of masterminding the probe. He claimed that the movement’s sympathizers in the judiciary and the police force had established a “parallel state” within the state bureaucracy and had plotted against his government. Although the Gülen movement strongly denies these allegations, Erdoğan and the AK Party government have since been fighting an all-out war against all the individuals and organizations that are thought to have any ties with the movement.

Erdoğan and many senior AK Party government officials visited Gülen-affiliated schools during their visits to African countries in the past and praised their contributions to raising the quality of education in Africa and promoting Turkish culture there. However, Erdoğan has now adopted the opposite stance and launched a defamation campaign against these schools, even asking African leaders to close down those schools and disallow Gülen-affiliated organizations from operating in the region.

The Chatham House report recalled that at the Second Turkey-Africa Partnership Summit in November 2014, Erdoğan warned the assembled African leaders of “hidden agendas” of the Gülen movement. The report also added that pro-government media sources reported that Erdoğan had managed to convince Gabon and Senegal to shut down Gülen-affiliated schools, and that the Republic of the Congo and Somalia had implemented processes for their closure, although these schools appear to remain open.

The report noted, however, that President Filipe Nyusi of Mozambique has expressed his support for the movement, announcing in mid-2015 that he intended to visit the Gülen-affiliated school in Maputo from which his son had graduated. In a similar move, Côte d’Ivoire’s deputy education minister was reported as having informed one news agency that Erdoğan’s stance against Africa was “similar to colonial states” in seeking an “educationally backward” continent.

The Gülen movement puts special emphasis on educational activities and interreligious dialogue. There are more than 1,000 schools in 160 countries which are affiliated with the movement. They are funded by the generous people of Turkey who are encouraged to open and support these schools by Gülen.

The Chatham House report added that the Gülen movement is at the forefront of Turkish civil society engagement in Africa, noting that it began as a faith-based, non-political, cultural and educational effort inside Turkey that has since spread globally.

“The movement’s financial support comes from a tradition of Turkish and Islamic charity, especially provided by the business community. … The movement is best known in SSA for the high-quality schools – primary and secondary institutions, as well as one university – that Turkish business people inspired by Gülen have financed. There is no central organization in charge of the schools, which are fee-paying private institutions with rigorous academic standards, and which follow the curriculum of the host country. There are close ties between the schools and Turkish sponsors doing business in the countries where they are located,” says the report, adding that there are approximately 96 Gülen-affiliated schools in SSA countries.

Nigeria has the most, with 17 schools, and is the location of the only Gülen-inspired university in Africa — the Nigerian Turkish Nile University in Abuja. Ethiopia, Kenya, Mali, Senegal, South Africa and Tanzania all have six or more schools, noted the report.

Kimse Yok Mu, a nongovernmental, Gülen-inspired relief organization, is also praised in the report for its relief activities in the SSA region. It said that between 2006, when the charity began its assistance to Africa, and 2013, Kimse Yok Mu provided about $65.4 million in aid to 45 countries. The organization’s efforts to help Africa reached their highest point in 2011, but have since declined. In 2013, it distributed about $17.5 million worth of assistance to 43 African countries, with most aid going to development projects, health, education, water wells and support for orphans.

“The AKP government’s efforts against the Gülenist movement have even extended to KYM [Kimse Yok Mu], which has had its bank accounts frozen and which was reported in April 2015 to be under investigation for alleged terrorist activities. Nonetheless, KYM, which inter alia aims to build 1,000 new schools in Africa by 2020, has subsequently signed a memorandum of understanding with the African Union on efforts to increase cooperation in aid, development and education,” noted the report.

An investigation being conducted by the Ankara Chief Public Prosecutor’s Office against Kimse Yok Mu on charges of terrorism came to public attention in April and drew strong criticism from many people who said the organization is a source of pride for Turkey for its humanitarian activities in Turkey and abroad.

The London-based think tank’s report also hails the activities of the Turkish Confederation of Businessmen and Industrialists (TUSKON) in Africa, saying that it has been particularly active in efforts to expand trade and commercial activity in the region, hosting the first Turkey–Africa Foreign Trade Bridge in 2006, and holding annual events since then.

The 2011 Trade Bridge brought together some 600 Turkish business representatives with 350 African counterparts from 54 countries, and TUSKON and affiliated organizations have organized more than 200 trade and investment delegations to Africa in recent years.

Yet the activities in Africa of TUSKON, which is affiliated with the Gülen movement, have also been hindered by the AK Party government. The report highlighted the fact that in early 2015, TUSKON’s president said that the confederation’s initiatives to promote trade — in particular Turkish exports to Africa — had been hampered by the refusal of Turkish embassies in Africa to grant visas to respected businesspeople.

“This apparently reflected tensions between the AKP administration and the Gülenist movement, to which TUSKON has ties,” the report said.