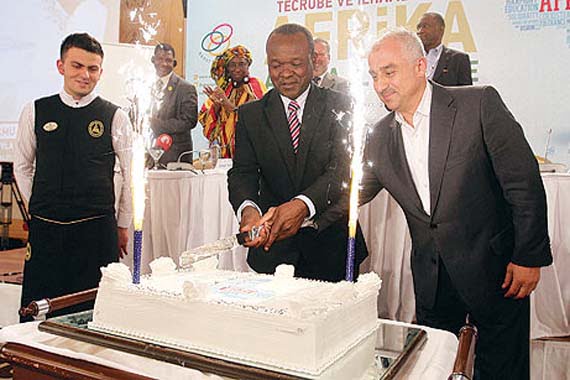 At the three-day meeting of the Abant Platform from June 28-30 to discuss Africa, participants from both Africa and Turkey agreed to intensify cooperation based on their mutual respect, goodwill and understanding.

The participants of the 29th Abant Platform Forum titled “Africa: Between Experience and Inspiration,” issued a declaration at the end of the meeting that emphasized Africa’s recent progress while recognizing the lingering problems of the continent, especially in the areas of health and education.

A long-lasting partnership with Turkey that has become more visible in the African continent during the last decade is welcomed by all, since Turkish businesspeople and civil society are perceived as having been respectful of the people of Africa during the implementation of their initiatives in the continent.

While speakers at the meeting described corruption, poor equality of opportunity in education and a lack of access to health services, especially for women in rural parts of Africa as problems, they emphasized that that for the first time in their history, Africans have become the decision-makers to shape their own destinies, rather than being the subjects of colonial powers. In particular, participants from Africa urged Turkey and other countries not to perceive Africa as though it was a single country, but rather, to recognize that it is a continent consisting of many different countries.

Moussa Dourfaye from the Embassy of Niger in Turkey said that Turkey has been conducting its cultural diplomacy very well. He also noted that it is important that assistance should directly go to communities in need and that there is a need for transformation in the channels of assistance to Africa.

Another diplomat from Kenya, Lindsay Kiptiness, acknowledged the problems in Africa, while stating that Africa should be taught to fish instead of being given fish by others.

Sam Nda-Isaiah, chairman of the LEADERSHIP Group from Nigeria said that Africans must start developing their own economies given the vast resources that the continent offers.

Ahmedou Ould Abdullah, a former UN special representative from Mauritania, on the other hand, said that corruption undermines competition in Africa and causes young people to lose hope in the future and leads them to turn to violence.

Directing attention to the gap between North and South Africa, a former deputy prime minister of Turkey, Ekrem Pakdemirli, said that aid from developed nations should be distributed to close this gap. He further said that Turkey cannot be present in Africa in heavy industry like China or India, but can take agro-industry, education and health services to Africa. He stated that countries that invest in Africa should not have a colonialist mindset in order to be welcomed there.

Education was identified as the key to solving all the major problems of the continent and participants from Africa complained that it is still considered a privilege in many areas of Africa due to the lack of equal access to education opportunities. The minister of education of Kinshasa Province in the Democratic Republic of Congo, Therese Olengha, stated that when the French colonists left the country, there were only five college graduates among the natives of the country. Professor Michael Faberada said that the attempt to educate African children in foreign languages “yields very minimal results” and he referred to well-known African scholar Ali Mazrui’s idea that no people have ever developed a strong scientific tradition in a foreign language.

Former Ambassador of Syria to Mauritania Mohamed Veddadi said that half of the 60 million children in the world who have no access at all to education are in Africa and the average illiteracy rate in Africa is 38 percent, the majority of which are women. Professor Kofi Anyidoho referred to the problems of African universities and he said that science and development should be areas of collaboration between Turkey and Africa. While talking about Nile University, established in Nigeria by Turkish entrepreneurs, President of İstanbul Fatih University Şerif Ali Tekalan added that there are schools established by Turkish volunteers in more than 45 countries in Africa.

President of the Higher Education Council of Turkey (YÖK) Gökhan Çetinsaya called on African universities to cooperate with Turkey as he said that there is no problem in terms of recognition of degrees earned in Africa in Turkey. He urged African academics and students to take advantage of the new Mevlana educational exchange program that YÖK will start this year.

In an effort to illustrate the discrepancy between the developed world and Africa another speaker noted that there are more people connected to the Internet in New York alone than there are in the whole of Africa. He further said, pointedly, “Corruption is our biggest killer in Africa.”

As far as health is concerned, malaria, HIV and fistula are listed as the biggest problems, in addition to insufficient access to doctors. The secretary-general of Helping Hands, a Turkish aid group, Savaş Metin said that although malaria and tuberculosis are still threats in Africa, there has been improvement, since death rates are declining.

The president of the Turkish Confederation of Businessmen and Industrialists (TUSKON), Rızanur Meral, on the other hand, who summarized their trade activities in Africa, said that Turkish businessmen were surprised to see higher levels of women’s participation in business life in Africa than in Turkey, as he added that they have been beginning to pursue opportunities in sub-Saharan Africa only recently.