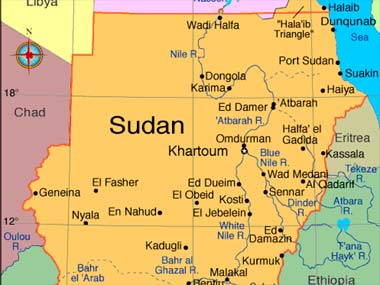 Turkish volunteers also established what many here say is a very accomplished school in the capital, nurturing and educating future generations of Sudanese who will be keen to maintain friendly ties between the two nations.

I was not planning to end up in Darfur last week when I booked the flight to Ankara from Strasbourg, where I covered the winter session of the Parliamentary Assembly of the Council of Europe. In fact, the next day, I was already scheduled to depart for Egypt to meet with the prime minister, foreign minister and other Egyptian officials until I got a last-minute call during a short layover in Munich for a connecting flight.

An official on the phone from the Egyptian Embassy in Ankara was advising me to delay my departure until the dust settled in his homeland.

While I was ready to relax and planned to take the week off, I got another call, this time from the office of State Minister Faruk Çelik, asking me if I was available to travel with the minister to Khartoum and then to Darfur. In an instinctive response, I said yes to a trip that would take me not to Egypt but to its neighbor across the southern border. I thought this would give me a chance to see the situation on the ground in Darfur. Well it did.

Despite all the criticism and the occasional outcry leveled at Turkish foreign policy vis-à-vis Sudan, some of which I share as well, one thing was made clear to me during this trip: Turks are really making a difference on the ground in Darfur no matter what critics say. Both the government-run Red Crescent Society and nongovernmental organizations like Kimse Yok Mu from Turkey are working hard on a daily basis to improve the lives of war-fatigued Darfur residents, numbering around 4 million.

One volunteer at the Red Crescent was telling me that Turks are the only ones who can wander the streets of Darfur without any fear of attack or provocation. The people of Darfur in particular and the Sudanese in general seem to have opened up their hearts to Turks, who apparently came to these people for no other reason than that of extending a helping hand to citizens in this struggling country. For example, the trust built up over time with Turkish doctors really made the field hospitals run by Turks one of the most attractive centers for those who seek treatment. The rumors of experimental trials run by Western drug companies still linger in the streets of Darfur.

There are many success stories here that could make intriguing news pieces. One businessman was telling me how he dodged a traffic ticket when police found out that he was Turkish, and others were recalling different tales, all showing the warmth of the Sudanese people for Turkish expats living and working here. Turks have been able to convert this goodwill into successful enterprises as well by recently winning a number of lucrative state contracts to build a highway, bridges and part of the new airport.

Turkish volunteers also established what many here say is a very accomplished school in the capital, nurturing and educating future generations of Sudanese who will be keen to maintain friendly ties between the two nations. The school, established in 1999, quickly turned out to be a very successful institution, ranking fourth among close to 800 private schools operating in the capital of Khartoum. Kimse Yok Mu is also planning to establish a school with a capacity of 600 students in the capital of Darfur near the airport. They have already acquired the land and drawn up projects, and soon they will break ground, I have been told.

Not only at the leadership level, but there is a sense of a strong bond with Turkey among the average people as well. It has been demonstrated time and again as Turkish State Minister Çelik made appearances with locals on a couple occasions. At the groundbreaking ceremony for a hospital building in Nyala, the event presenter was reminding the audience of the historical fact that they are the descendents of the Ottomans who once ruled this region in the 17th century. There are historic buildings around Khartoum that include a mosque built by the Ottoman governor of the time. In reciprocal remarks, Çelik thanked the Sudanese people for their support for the Ottoman Turks during World War I, vowing their contribution would never be forgotten.