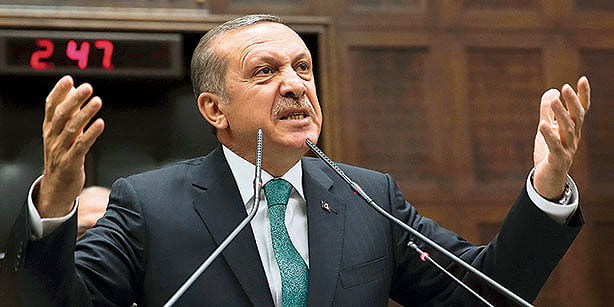 Turkey’s failed coup on the 15th of July continues to throw up questions as more people get arrested and detained in its aftermath. Soldiers, policemen, teachers, government officials amongst others, have all been arrested as part of an attempt to clamp down on its organisers. Many schools, charity organisations, hospitals and universities have also been closed down for their alleged links to the coup plotters.

Turkey’s parliament declared a three-month-long state of emergency on Wednesday, granting the State powers to pass laws directly. First on Turkey’s President Recep Erdogan’s agenda is the arrest and extradition of Fethullah Gülen, a man he claims masterminded the coup attempt, from the United States. Blaming Gülen appears to be an easy solution for a coup that is complex. It also presents the perfect chance for Erdogan to cement his authority.

Fethullah Gülen is a well-known Islamic cleric in Turkey, where he has a large following. He is currently on a self-imposed exile in Pennsylvania, caused, in part, by Erdogan, after his followers implicated Erdogan’s son in a corruption scandal in 2013. Gülen is believed to be Turkey’s second most powerful man. He is also the leader of the Gülen movement, also known as Hizmet (service) in Turkey. His movement is a well-organised group of people, with millions of followers scattered all around Turkey, Pakistan, Romania and the United states. The Muslim cleric advocates a more tolerant version of Islam, and his sermons have been described as “peaceful, tolerant and harmonious.”

His antagonists have accused him of trying to create an Islamic state in Turkey, an accusation he has denounced many times. It seems Erdogan has joined the train, by branding Gülen’s movement “the Fethullah Terrorist Organisation.” That appendage seems surprising, especially when it is a well-known fact that Erdogan’s rise to power was facilitated by Gülen’s followers in Turkey.

When Erdogan became president in 2003, he immediately started changing the heads of the at the time secular Turkish military, replacing them with followers of his friend, Gülen. It seemed like the right move. Turkey was trying to change its long history of military rule and, to prevent further coups, Erdogan tried to islamise the nation’s military or so it seemed. Naturally, many opposed this move strongly.

For example, there were widespread allegations in May, last year, by Cumhuriyet, one of Turkey’s oldest newspapers, that Erdogan was supplying weapons to Islamic rebels in Syria. Erdogan promptly jailed the Editor and another members of staff from the newspaper. Along with jailing other members of the press and the opposition, Erdogan was also rumoured to be planning on replacing top Army brass in August, before the coup attempt. Perhaps, this was what lead to it and not the American-based Islamic cleric.

“I think Erdogan has been successful in getting public support by frightening people. He applied fear as a policy and has been rewarded… This is a type of president we have never seen before in Turkey…President Tayyip Erdogan is a person who cannot stand any thought different than his thoughts and he is doing this very brazenly.” These statements were made earlier this year by Eran Kaskin, a veteran human rights campaigner in Turkey who is presently detained for “insulting” the president. And she has seen her share of jail time, having been detained and released many times in Turkey’s past military era. Erdogan has also, many times, temporarily suspended the use of social media in the past few years. He did the same thing in the last week, when Wikileaks revealed secrets about the State’s justice system to the public.

The accusations levied at Gülen by Erdogan appears a little like paranoia, a kind of delusion of persecution amidst his plan to monopolise power, especially now as he tries to cement his autocratic hold on the Turkish government. For a man who is touted to be Turkey’s second most powerful man, even Gülen would have to be a god to get about 60,000 people (the number of Turkish people arrested for their links to the coup) to have a singular purpose to infiltrate the Turkish government and initiate the overthrow of  Erdogan on the same day. Except it was a revolution, an improbable one when its sick leader was halfway across the world in an estate in Pennsylvania, USA, Turkey’s citizens obviously were not on the same page.

Erdogan’s speech thanking Turkish people for saving democracy might have been just that: saving democracy, instead of saving him. However, the country’s choice of an “autocratic” democracy to a military coup might just have given Erdogan’s grand delusions some armoury.

Erdogan has unlimited power for the next three months during the state of emergency and he is already thinking of instituting the death penalty (remember the Austro-Hungarian German dictator called Hitler). Here’s to hoping he self-implodes in the next three months, because it is doubtful he will relinquish his hold on power at the end. Every opposition member seems to be a threat now. The Christian bible says: the wicked runs when no one pursues them. Erdogan seems to be running with a time-bomb to destroy everyone around him.