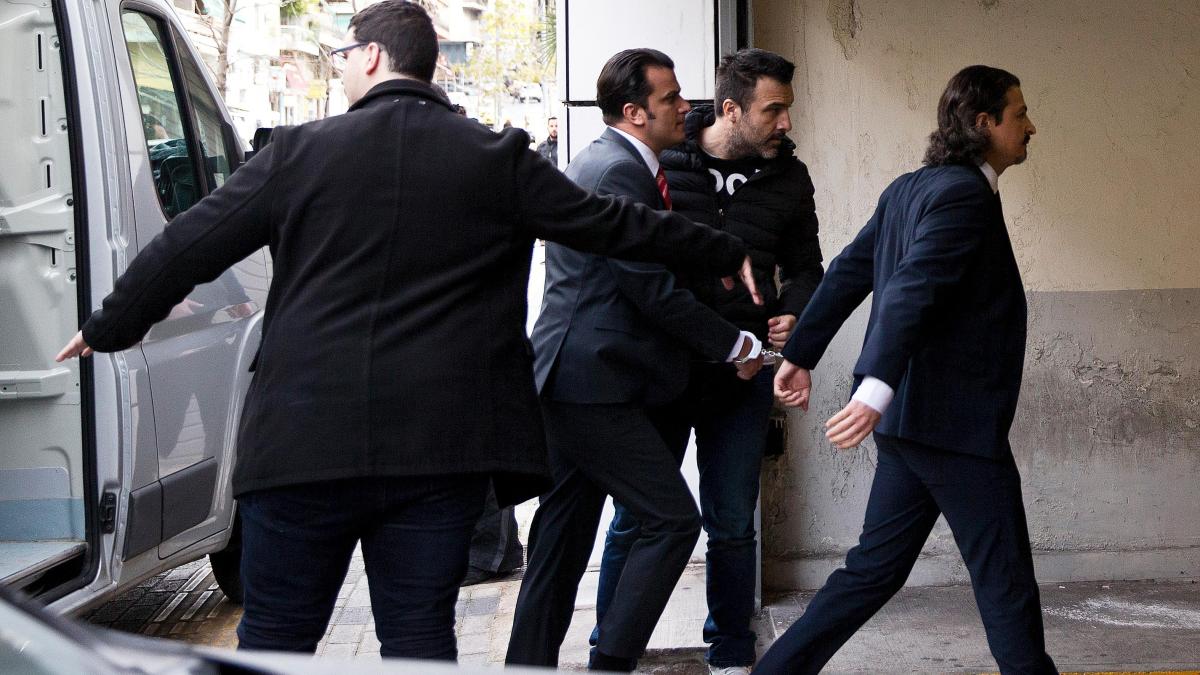 Two Turkish servicemen being taken in handcuffs to the Athens appeals court this morning. The court refused Turkey’s request to extradite them. PETROS GIANNAKOURIS/AP

The precise number of people moving across the border is not known, but figures released by the Greek government this morning showed that asylum claims had risen from 43 in 2015, to 1,827 last year.

Applications have soared since the ill-fated coup attempt against Mr Erdogan in 2016. The Turkish government responded with sweeping purges and prosecutions of supporters of the popular Hizmet movement, led the US-based cleric Fethullah Gulen, whom Turkish officials have blamed for orchestrating the rebellion.

An estimated 151,967 state officials and civil servants have been sacked from their jobs, according to Turkey Purge, a group that charts actions against opponents of Mr Erdogan. About 4,500 judges and prosecutors have been hardest hit by the campaign, as well as an estimated 5,822 academics — the bulk of the defectors pouring into Greece.

The most high-profile case concerns eight Turkish servicemen. This morning an Athens appeals court refused a request by Turkey to extradite the men. Mr Erdogan’s government wants to try them for their alleged role in mobilising a mutinous faction in Turkey’s armed forces during the failed coup, before hijacking a military helicopter and fleeing to northern Greece.

All eight men have denied the allegations and the appeals court upheld an earlier Supreme Court ruling blocking their extradition for fear that they would not receive a fair trial in Turkey. EU and Greek law forbids extradition to a country where an alleged offender would be at risk of torture, as the eight fugitives have argued they would be.

Turkey has attempted to influence the outcome of the case by leaking footage of the servicemen, many of them armed with handguns, being pursued by elite guards after the coup attempt.

This month two Greek soldiers were arrested after straying into Turkish territory while pursuing alleged illegal immigrants. The soldiers have since been held in Turkish custody in the western province of Edirne, facing charges of illegal entry and spying.