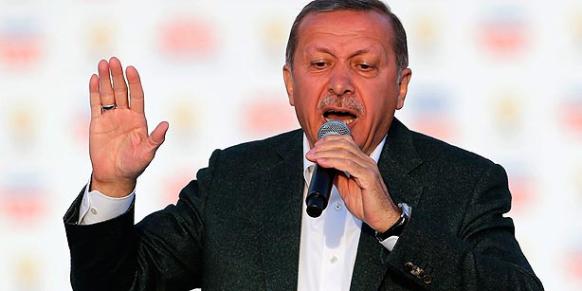 Politicians, members of the judiciary and journalists have spoken out against threatening remarks by Prime Minister Recep Tayyip Erdoğan, who stated that the government will carry out a witch hunt against followers of a faith-based group.

The remarks led to comments that the prime minister has acknowledged that the purges have indeed been some sort of witch hunt.

Felicity Party (SP) leader Mustafa Kamalak interpreted Erdoğan’s remarks as a sign of an oppressive regime in Turkey, saying Erdoğan will suffer a great deal due to its tilt toward an oppressive style of governance. “The state does not conduct a witch hunt. It acts within the boundaries of law instead. The state cannot act like a gang. It cannot suspend the rule of law,” he said.

Main opposition Republican People’s Party (CHP) Chairman Kemal Kılıçdaroğlu said on Sunday that the prime minister’s statement is fitting for a dictator. “Those who want to rule the country should rule with wisdom, not through anger,” he added.

The Justice and Development Party (AK Party) government, frustrated by a major graft investigation that became public on Dec. 17 of last year, has been quick to reassign public officials en masse in response to the operation. The probe implicated several Cabinet members who had to resign later and senior government officials, and as many as 20,000 police officers and hundreds of members of the judiciary as well as dozens of bureaucrats in public institutions have been reassigned since Dec. 17. The fact that no investigation had been launched before those officials were reassigned and that most of the officials were not given any explanation for their reassignment has led to comments that the government is carrying out a witch hunt against its critics.

There are rumors that the only criteria behind these purges are alleged links to a “parallel state,” a term the government has been using to describe the Hizmet movement, which is a grassroots movement based on voluntary participation aimed at fostering interfaith dialogue and tolerance, with a particular emphasis on education. The government has been at odds with the Hizmet movement since the Gezi protests and has been reassigning public officials known or suspected to be close to the movement.

Nationalist Movement Party (MHP) Deputy Chairwoman Ruhsar Demirel said the prime minister owes an apology to thousands of public officials, including members of the police force and the judiciary, as well as other civil servants who have been displaced recently, but instead he has vowed to carry out a witch hunt. “This stance does not befit a prime minister,” she noted.

According to Demirel, the prime minister should choose his words very carefully before making public statements. “Provocative statements further deepen the polarization and divisions in society,” she said, adding that Prime Minister Erdoğan is in a paradoxical situation, as he keeps telling people that he does not want to see mothers cry any more but also makes thousands of mothers cry by removing their children from their jobs for no reason at all.

The prime minister also insulted members of the Hizmet movement during his speech on Sunday. “We will sterilize the dirty water that has contaminated the milk either by boiling the milk or separating molecules in the mixture,” he stated. In addition, he encouraged AK Party officials and members to carry on their “fight” against the Hizmet movement.

“Anyone who is negligent in this struggle will betray this nation. Anyone who takes steps back, [or] intends to compromise and forget what has happened in the past, will make a black mark on the trust of our people. Anyone who keeps silent by showing no reaction or who bows to threats and blackmail will go down in history as what they are,” the prime minister said.

Most of the public officials removed have been appointed to less prestigious positions. Recent media reports have said certain ministries are planning to dismiss the reassigned officers in the upcoming weeks. The officials will allegedly be dismissed on charges of engaging in illegal wiretapping activities, leaking or destroying important data, misconduct and acquiring information through illegal means.

The prime minister has also implicitly urged citizens to report members or followers of the Hizmet movement to the government and said the government will “take action” against them. “This is not a simple struggle,” he said.

CHP deputy Rıza Türmen said the AK Party government has already launched a witch hunt against its critics and had better stop it immediately. “The government should stop the witch hunt and begin thinking about how to act in line with democracy and the law,” he said.

In early April, President Abdullah Gül said no witch hunts targeting any group or individual can occur in a just state. “You can’t blame people for not thinking the way you do. But if there are people who have committed crimes in state agencies, it is unthinkable that these crimes will go unpunished,” he stated.

Former AK Party deputy İdris Bal, who is currently serving as an independent member of Parliament after resigning from the ruling party, said he regrets seeing the prime minister making statements that aim to polarize the people further. “It is a pity that some are working to polarize the people through narrow-minded discourse and making statements that insults people’s intelligence and the law, while others are applauding those statements. What a pity,” he said.

İsmail Poyraz, a Central Executive Board (MYK) member of the Human Rights Association (İHD), said the AK Party government is involved in practices that are worse than McCarthyism.

“All these things suggest that the prime minister is suffering from [psychological] trauma. Because he is aware that he is committing a crime by replacing thousands of officials, the prime minister keeps claiming that these officials were working toward a coup against his government,” Poyraz added.

According to Orhan Kemal Cengiz, a lawyer and human-rights activist, Prime Minister Erdoğan has further stepped up the harshness in his statements and that he looks decided to continue down his path of polarizing the people. “He accuses people of treason; he removes them from duty and reassigns them to other posts but he does not take any legal action against them. He works to intimidate society,” Cengiz said.

Erdoğan’s witch-hunt remarks have also kicked off a heated debate in social media. Many well-known users have used Twitter to write their opinions about the controversial remarks.

Cenk Sidar, the founder of Sidar Global Advisors (SGA), a Washington, D.C.-based consulting firm, said Erdoğan has gone down in political history as a dictator who openly confessed his plan to carry out a witch hunt.

Journalist Mehmet Baransu said the prime minister and his government had already launched a “witch hunt” several months ago.

According to retired public prosecutor Gültekin Avcı, witch hunts have no place in democracies. “They must do what the law requires, if they have any evidence,” he stated.

Journalist Tuncay Opçin said that whoever declares the intention of carrying out a witch hunt is a dictator.

While responding to a question on hate speech, the Religious Affairs Directorate said on Monday that Islam does not allow its followers to use such discourse.

A man identified as Mustafa Petek asked the Religious Affairs Directorate on March 24 if Turkish Islamic scholar Fethullah Gülen, who inspired the Hizmet movement, deserves to be a target of hate speech by state officials. Prime Minister Recep Tayyip Erdoğan and several government officials have been targeting Gülen and the movement, calling him a “false prophet,” “fake saint” and “bogus scholar,” and Hizmet a “parallel state,” a “gang,” “cave dwellers,” “tools,” a “virus,” a “tumor,” an “illegal organization” and “raving Hashishin,” which was a medieval order of assassins.

The Religious Affairs Directorate, in response to the man’s query on hate speech, said, “In Islam, no one is allowed to humiliate a person or refer to him using adjectives that don’t represent him.”