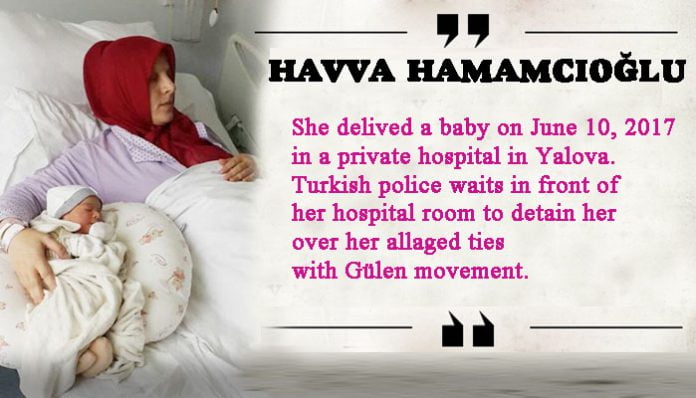 A group of police officers awaited outside a private hospital in Yalova province of Turkey in order to detain a woman who had given birth several hours earlier, according to a tweet by MağduriyetlerTR account.

Havva Hamamcıoğlu who delivered a baby on Friday night will be detained over her alleged links with faith-based Gülen movement as her husband Nazmi Hamamcıoğlu got arrested on Friday over same accusations, @magduriyetlertr Twitter account wrote.

The tweet which carries a photos of Havva with her new born baby also said the couple has a six year-old son.

This is not the first time Turkish police detain a woman in a hospital after their delivery.

Recently on June 2, Elif Aslaner, a religious education teacher who gave birth to a baby May 31 at a private hospital in Bursa, was detained due to her alleged links to Gülen movement which Turkish government accuse of being behind a failed coup last summer.

In May, Aysun Aydemir, an English teacher who gave birth to a baby in an elective cesarean procedure, was detained at the hospital and subsequently arrested by a court and put in pretrial detention with a 3-day-old baby in Zonguldak province as part of a witch-hunt targeting the Gülen movement.

In late January, Fadime Günay, who gave birth to a baby, was detained by police at Antalya’s Alanya Başkent Hospital as part of the witch-hunt targeting the Gülen movement.
In early January, Ş.A., a former private school teacher and mother of a week-old premature infant, was taken into police custody over links to the Gülen movement while she was on her way to the hospital to feed the baby.

A day after Ş.A. was taken into police custody, another mother known as Meryem gave birth to twins by C-section in a hospital in Konya and was detained by police despite hospital reports that she should not travel and was taken to Aksaray from Konya in a police car.

More than 17,000 women in Turkey, many with small children, have been jailed in an unprecedented crackdown and subjected to torture and ill-treatment in detention centers and prisons as part of the government’s systematic campaign of intimidation and persecution of critics and opponents, a new report titled “Jailing Women In Turkey: Systematic Campaign of Persecution and Fear” released in April by the Stockholm Center for Freedom (SCF) has revealed.