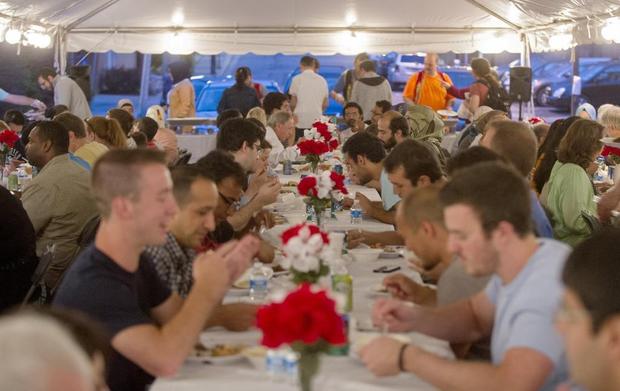 It was just after 6:30 p.m. on the third day of Ramadan and the sun was refusing to cooperate.

The dwindling rays of the sun were all that were standing between these folks and the intoxicating aroma of lentil soup, white rice and Turkish doner kabob beckoning from stainless steel dishes just a few feet away.

Charles Morgan, president of The Islamic Society, was doing his best to block the view of the culinary delights just out of reach, delivering an impassioned speech about the meaning and sacrifice of Ramadan while a small boy in glasses and a red T-shirt eyed an unopened can of iced tea with a look of longing and desperation typically reserved for one’s wedding day.

Morgan’s words may have been more eloquent, but it was the boy who cut straight to the real theme of the evening.

Ramadan is a monthlong period of fasting observed by Muslims, who refrain from eating or drinking from sunrise until sunset for 30 days to commemorate the moment when the Quran, the Muslim holy book, was revealed to the Prophet Muhammad.

Friday night’s observation was organized by volunteers from the Turkish Cultural Center with the goal of sharing Ramadan with both Muslims and the community at large.

“We would like to open the celebration to the wider community to see what Ramadan is about,” Turan Balik, a volunteer with the Turkish Cultural Center, said.

Balik was preparing to take his seat alongside his wife and daughter as the opening remarks began.

Once each speaker concluded — much to the relief of the boy in red — the crowd lined up outside of the tent for food while a man played music from a ney, a reed flute and traditional Turkish instrument.

While the ney provides a certain amount of historical gravitas, Balik said that they were trying to keep it to a minimum. The instrument’s somber sound wasn’t as conducive to lively conversation as baklava, a traditional Turkish pastry.

“When you share a meal with someone you get to know more than just their name,” Balik said.

The sense of tradition and history wasn’t only limited to the actual proceedings. At the back of the tent, framed photos depicted vibrant scenes from Ramadan celebrations in Turkey, while a nearby table held samples of Turkish tea cups and artwork.

“It’s a very small representation of what’s done in Turkey but it’s really nice to even get this opportunity to celebrate together,” Elif Dogru, a volunteer with the Turkish Cultural Center, said.

Tammy Bierly and her daughter, Tiffany, looked at the photos before they sat down for dinner. The elder Bierly is the landlord of Nursen Konvk, a Ph.D. student at Penn State.

Bierly had always been curious about her tenant’s Muslim heritage and Konvk invited the family to the tent dinner so that they could experience a taste of it firsthand.

Both mother and daughter were enjoying themselves.

“It’s something that we don’t have all of the time — or ever — so it’s good to expand our horizons,” Tiffany Bierly said.