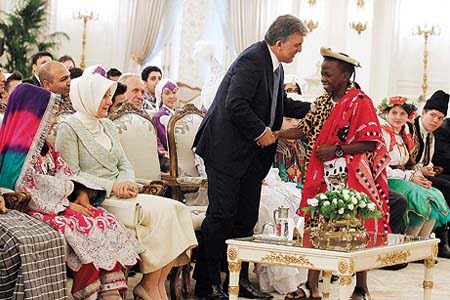 President Abdullah Gül hosted a group of students coming to Turkey as part of the 11th International Turkish Olympiad, a festival that celebrates the Turkish language and this year brought together 2,000 students from 140 countries around the world, in the capital on Friday.

The Turkish Olympiad, which is organized by the International Turkish Education Association (TÜRKÇEDER) each year as part of the International Language and Culture Festival, is being held from June 1-16. A total of 99 stage shows will be held in 55 cities across Turkey during this 16-day period.

The students delighted Gül and many other visitors during their performances, which were staged on a platform built at the palace. Among the visitors at the presidential mansion were Deputy Parliament Speaker and chairman of the organizing committee of the International Turkish Language Olympiad Mehmet Sağlam and Fatih University Rector Şerif Ali Tekalan.

Another group of Olympiad students visited Constitutional Court President Haşim Kılıç on Friday in Ankara. Welcoming the students, Kılıç stated: “Maybe the Turkish government could not hold such a top organization, but you [the organizing committee members and students] achieved this with great love and enthusiasm although you are not professional. Because of all your efforts, you deserve great admiration and compliments.”

Kılıç sent his gratitude to teachers working at Turkish schools located in almost every part of the world for their great efforts to promote the Turkish language and culture.

Some of the students sang Turkish songs and read Turkish poems, which attracted great interest from Kılıç during the visit. The students presented gifts to Kılıç and posed with him for a souvenir photo.

In Gaziantep on Thursday night, Justice and Development Party’s (AK Party) Deputy Chairman Hüseyin Çelik called for unity and solidarity during a stage show held as part of the 11th Turkish Olympiads.

Speaking during the stage show, Çelik referred to the recent protests that erupted over the demolition of İstanbul’s Gezi Park in Taksim on May 27 and spread to other parts of Turkey.

Çelik stated: “There are some people who are not pleased with Turkey’s recent financial and political improvements and try to prevent further development of the country. They endeavor to disturb the peace in the country. However, thanks to our common sense, brotherhood, unity and solidarity, I hope we will prevent those ill-intentioned people from achieving their goals.”

The stage show was held at Kamil Ocak Stadium on Thursday night with the participation of thousands of locals.

Çelik thanked Turkish teachers working at Turkish schools and also saluted Turkish-Islamic scholar and intellectual Fethullah Gülen with respect for his contributions and supports for the organization of the Turkish Olympiads.