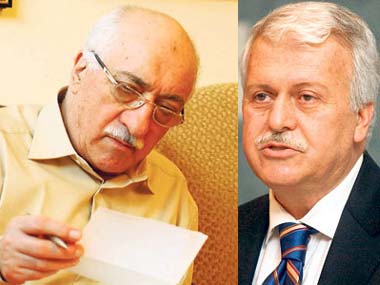 Zaman and Today’s Zaman columnist Hüseyin Gülerce’s meeting with lawyers of jailed PKK leader Öcalan sparked a defamation campaign against Gülen and the movement named after him.

News reports trying to create a perception that the faith-based Gülen movement is cooperating with the terrorist Kurdistan Workers’ Party (PKK) are ill-intentioned, according to Islamic scholar Fethullah Gülen’s lawyer, Orhan Erdemli.

In a statement he released on Gülen’s website, www.tr.fgulen.com, on Monday, Erdemli pointed out that certain media outlets’ “incriminating” attitude toward his client based on groundless allegations “constitutes the most terrible violation of his rights.” He added that Gülen’s emphasis on peace and dislike and disapproval of violence and terrorism are well known. “My client’s thoughts and practices arise from his world of faith. And this system of faith is not seasonal or tactical but aimed at bringing world and after-world happiness to human kind,” Erdemli explained.

The latest defamation campaign by the ultranationalist media against Gülen and the social movement named after him was initiated after Zaman and Today’s Zaman columnist Hüseyin Gülerce met with lawyers of jailed PKK leader Abdullah Öcalan in the northwestern province of Yalova earlier this month. Depicting Gülerce as if he was representing the movement at the meeting, certain ultranationalist newspapers and TV stations reported that the meeting was a sign that the terrorist group and the movement were getting closer to each other. Later on, terrorist leader Öcalan conveyed some laudatory remarks about the movement through his lawyers. And lastly, a columnist at the liberal Taraf daily reported on Tuesday that Öcalan also told his lawyers at his last meeting with them that the terrorist group is also ready to cooperate with the movement to “further Turkey’s democratization.” Despite Gülerce noting he is neither a representative nor a spokesman for the movement and met Öcalan’s lawyers only as a journalist, the defamation efforts aimed at associating the movement with the terrorist PKK did not cease.

Most recently, it was revealed by prosecutors that some groups were planning to present the movement as an armed terrorist group itself by planting munitions at institutions linked to the movement that would later be found by police as part of a coup plot drafted by an active duty colonel. Earlier, Gülen was also accused by ultranationalist media outlets of being a Vatican and CIA agent. No such allegations have proven to be true. In addition to those groundless allegations, he was also charged with aiming to establish an Islamist order in Turkey, but he was acquitted two years ago.

Considering the conflicting and untenable nature of all accusations expressed so far against him, people came to understand that Gülen and the movement have become the target of certain groups for their contributions to mutual understanding between adherents of different cultures and religions as well as in the field of education not only in Turkey but also around the world. Volunteers who have been inspired by Gülen’s peaceful teachings have opened hundreds of educational institutions from kindergartens to universities in more than 100 countries so far. Gülen is a retired imam who is currently living a reclusive life in the US and is the author of over 50 books, most of which have been translated into English, Arabic, French, Spanish and Russian. He delivers weekly sermons on his website.

‘Gülen has no representative’

The entire defamation campaign was based on Gülerce’s meeting with terrorist leader Öcalan’s lawyers. In his statement released yesterday on behalf of Gülen, Erdemli also started disavowing the allegations by underlining that his client does not have a representative or a spokesperson.

“It is obvious that such reports are ill-intentioned publications aimed at turning public opinion against Mr. Gülen. … In the light of these developments, we would like to emphasize once again that Mr. Gülen has strived his entire life to help love, brotherhood, unity and togetherness, peace and justice to have a place in our hearts. Considering them as they are and seeing racial, linguistic and intellectual differences as a richness, he has invited everyone to engage in dialogue and tolerance. … People as well as being in the service of humanity in the framework of universal values are at the center of his thoughts,” said Erdemli in his statement, adding that anarchy and terrorism as opposed to his client’s cause aim to destroy people with violence and persecution.

Gülerce, whose meeting with terrorist leader Öcalan’s lawyers was exploited by the ultranationalist media, responded to the allegations in a column he wrote for the Zaman daily on Tuesday, too. “While from my perspective it was a meeting that took place at the request of the lawyers, I realized later on that some groups have been trying to twist the story,” he said, adding that he did not tell the lawyers anything different from what he has said about resolving the Kurdish issue in the past. “But apparently I made a mistake. I forgot that having good intentions means nothing to sick-minded people. I forgot that humanistic approaches are foreign to some people,” he also noted in disappointment with regard to the ultranationalist media’s allegations.

As a wave of violence washed over Turkey, President Erdogan pointed the finger of blame to Fethullah Gulen. In a rare interview with CNN’s