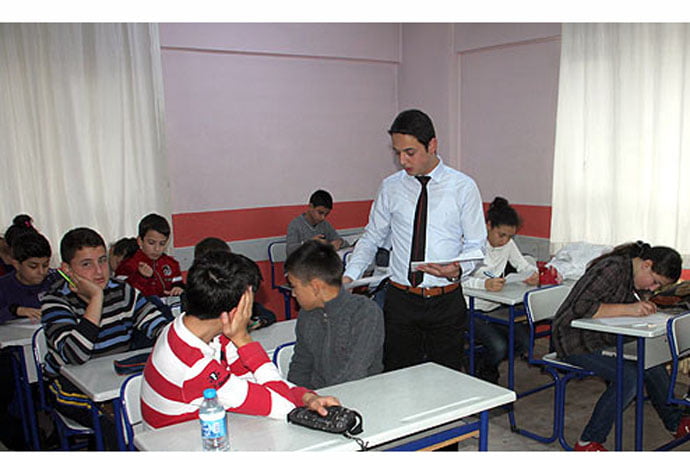 A classroom in a prep school in Zonguldak. (Photo: Cihan, Sinan Kabatepe)

A new document obtained by Today’s Zaman suggests that the Education Ministry sought in 2012 to profile students and teachers at some prep schools based on their religious and ideological backgrounds through questionnaires handed out to students at state schools.

According to the document, the ministry ordered inspectors to visit state schools across the country and ask students questions about their prep school preferences. In line with the ministry’s order, inspectors prepared a questionnaire and handed the documents to certain students to fill out. In the questionnaire, students were asked such questions as “Are you urged by your teachers to attend prep courses?” “Which prep school do you attend?” “Do your teachers tell you to attend prep courses instead of attending schools? If yes, write the names of those teachers.”

While only attendees of prep schools owned by the Hizmet movement, a faith-based movement inspired by Islamic Turkish scholar Fethullah Gülen, were asked to fill out those questionnaires, other students were given separate questionnaires that did not include any questions linked to the prep schools they attended.

Last year, the father of a student wrote a complaint to the Education Ministry, asking why his child was given a questionnaire that asked about his prep school and teachers there. In his complaint, he said: “My son told me that an inspector visited their class and asked the teacher to leave the classroom. The students were given different questionnaires. My son and some other students, who attend the Kocatepe prep school [owned by the Hizmet movement], were asked questioned about their IDs, names of their teachers at the prep school and the relation between their school and the prep school. I am afraid that the questionnaire sought to blacklist my son and other students. I am both curious and concerned.”

In a separate case, a high school student petitioned the Ankara Governor’s Office after he was asked to fill out a questionnaire by Education Ministry inspectors. The student complained in his petition that he and some of his friends were given different questionnaires than other students. “The questionnaire even asked about the names of our teachers at the prep school. Why did the ministry need to carry out such questionnaires? Are we being blacklisted?”

The document came at a time when Turkey was discussing a government plan to close prep schools. Prep schools help Turkish students prepare for standardized high school and college entrance exams. Although preparatory schools in Turkey have played an important role in the education system for the past 30 years or so, the government has announced that all prep schools will be shut down at the end of the next school year. Prep schools can serve instead, the government said, as private schools in the future.