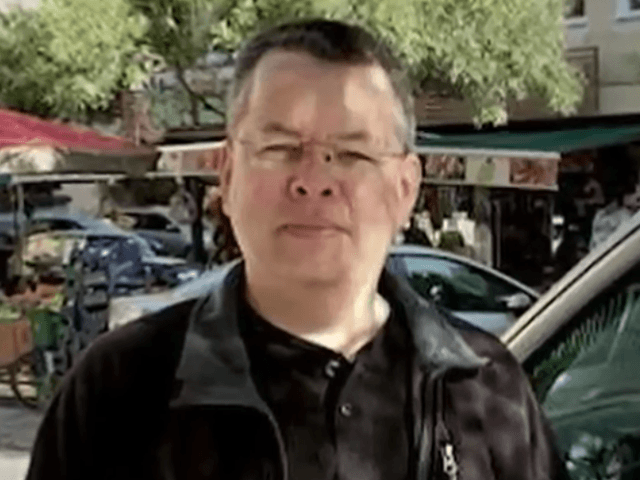 In remarks this week, Erdogan dismissed the idea of releasing Brunson—who faces dubious charges of being both a Gulen supporter, despite being a Christian, and an enabler of Kurdish separatism and has been additionally accused of being a CIA agent—without the United States extraditing Gulen, a former ally he blames for the failed coup against his Islamist government in July 2016. Erdogan offered to trade “that pastor … for this one” and claimed that Gulen’s extradition was easier than Brunson’s release because Gulen is not facing any criminal charges in the United States.

Gulen denies involvement in the coup and the U.S. government has not accepted the extradition request citing a lack of evidence that Gulen has committed any crimes.

“Look, I can’t imagine that we would go down that road,” Nauert told reporters Thursday, referring to the trade proposal. “We have received extradition requests for him [Gulen]. I have nothing new for you on that. We continue to call for Pastor Brunson’s release.”

Nauert confirmed that Turkey had repeatedly demanded Gulen’s arrest. “We continue to evaluate it, take a look at the materials that the Turkish Government has provided us. I don’t have anything new for you on the subject of that,” she noted.

On Brunson, Nauert asserted that the State Department “has been in as close of contact as we can be with Pastor Brunson. We last were able to visit him on September the 18th.”

“He was wrongfully imprisoned in Turkey, and we’d like to see him brought home,” Nauert concluded. President Donald Trump personally urged Erdogan to free the pastor in May, when the Turkish head of state visited the White House. At the time, Erdogan also raised the issue of extraditing Gulen.

Speaking to reporters, Erdogan claimed this week that he had offered America to free Brunson in exchange for Gulen, the head of a charter school network and movement known as Hizmet who resides in Pennsylvania. “We have given you all the documents necessary [for the extradition of Gülen]. But they say, ‘give us the pastor.’ You have another pastor in your hands. Give us that pastor and we will do what we can in the judiciary to give you this one,” Erdogan said.

“They say, ‘don’t get involved with him.’ How come? You say you have a judiciary, do you think we don’t? Anyway, the one that we have [in our hands] is being tried, the one you have [in your hands] is not being tried. It is easier for you to give,” he concluded.

Gulen faces over 3,500 life sentences in Turkey for his alleged involvement in the coup; tens of thousands of people accused of being Gulenists have faced arrest, detention, or dismissal at state jobs following the failed coup. Gulen denies involvement in the coup and the U.S. government has not accepted the extradition request citing a lack of evidence that Gulen has committed any crimes.

Erdogan’s remarks on Brunson have incensed many in the United States who view the pastor—who had preached in Turkey for over two decades without incident—as a hostage.

“President Erdogan’s suggestion that the U.S. should make a hostage-style prisoner swap for an innocent American imprisoned in Turkey is appalling and will not be taken seriously,” Sen. James Lankford (R-OK) said. CNS News also compiles responses from the Twitter accounts of various American lawmakers and commenters asserting that Erdogan’s open office to liberate Brunson proves he is being held hostage, innocent of the charges he faces.

Brunson’s is not the first case that has resulted in a Western country accusing Erdogan of hostage diplomacy. In August, German Foreign Minister Sigmar Gabriel used the term in response to the arrests of multiple Germany citizens on unfounded charges. Following their arrests, Erdogan demanded Germany extradite several individuals he accused of being “Gulenists” involved in the failed coup.