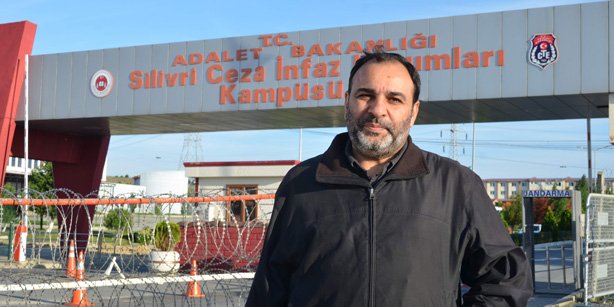 Today's Zaman Editor-in-Chief Bülent Keneş is in front of Silivri Prison after he was released. (Photo: Today's Zaman)

Keneş’s lawyer, Hasan Günaydın, challenged on Monday the decision to arrest his client, submitting a 14-page petition to the İstanbul 7th Penal Court of Peace. Günaydın asked the court to reconsider its ruling or send the petition to another court to look into.

Atilla Öztürk, the judge of the İstanbul 8th Penal Court of Peace, on Wednesday ruled for the release of Keneş. Öztürk said in the ruling all the evidence on which Keneş had been charged had been gathered and there is no possibility of spoliation of evidence.

“Therefore the İstanbul 7th Penal Court of Peace rules for the lifting of the arrest order and the immediate release of Keneş from prison,” the ruling said. The court also barred Keneş from travelling abroad.

Günaydın said in the petition to the court there is no crime in the Turkish Penal Code (TCK) for “sending tweets.” In addition, Günaydın said in the petition Article 299 of the Turkish Penal Code (TCK), which Keneş is alleged to have violated, is clearly in contradiction with Article 10 of the European Convention on Human Rights (ECHR), which protects freedom of expression. According to Article 90 of the Constitution, the ECHR overrules local laws in the event of a contradiction.

Keneş, who was placed in İstanbul’s Metris Prison after his arrest by the İstanbul 7th Penal Court of Peace on Saturday for his tweets allegedly insulting President Recep Tayyip Erdoğan, was transferred alongside terrorist suspects to the city’s Silivri Prison on Monday afternoon.

According to the ruling, Keneş has to check in with the police station closest to his home every Sunday until the indictment is submitted and his trial begins.

When Today’s Zaman went to print Keneş had been released from Silivri Prison and was on his way to the headquarters of Today’s Zaman accompanied by his lawyers. Keneş will meet his family and colleagues in his office and is expected to give a press conference.

According to lawyers, academics and politicians, the arrest of journalists, including Keneş, proves the judiciary has become a tool of the interim Justice and Development Party (AK Party) government in order to pressure dissidents.

Speaking with Today’s Zaman on Wednesday, lawyer Celal Ülgen underlined that the detentions and arrests by penal courts of peace serve the political interests of the government and are used as a weapon against its opponents. Ülgen believes the arrest of Keneş and the release of the assailants of Hürriyet columnist Ahmet Hakan Çoşkun, both by İstanbul 7th Penal Court of Peace Judge İsmail Yavuz, prove the AK Party’s pressure on dissident journalists through these courts.

Critical journalist Coşkun was attacked by four men, three of them reported to be members of the AK Party, in front of his home in the early hours of Oct. 1 following politically motivated threats for expressing ideas critical of the AK Party government in his newspaper columns. One of the seven suspects referred to the İstanbul 7th Penal Court of Peace on Oct. 4 in relation to the attack on Çoşkun was arrested, while the other six were released.

According to Baskın Oran, a professor of international relations, the government is using Article 299 of the Turkish Penal Code (TCK) in place of notorious Article 301, which had frequently been used as the basis for cases where there were charges of insulting “Turkishness” until it was amended by Parliament in 2008.

Article 299 is now the basis for cases where there are charges of insulting President Erdoğan, Oran told Today’s Zaman. “Same like Article 301, one day, Article 299 will also go in the wastebasket in history,” he said.

Eser Karakaş, a professor of economics and the head of Bahçeşehir University, told Today’s Zaman that nowhere in Europe are people sent to prison on charges of insult. Underlining that there are demands for compensation in these insult cases, Karakaş noted, “These [insult] cases have become a tool to silence people critical of the government.”

Speaking to the Cihan news agency on Wednesday, the editors-in-chief of prominent newspapers in the Netherland said silencing dissident journalists for their Twitter posts is a sign of dictatorial policies.

According to the editor-in-chief of the De Volkskrant daily, Philippe Remarque, Keneş’s arrest demonstrates how the AK Party government views freedom of the press. Remarque said such intimidation of journalists was also seen during the AK Party rule in Turkey.

Trouw Editor-in-Chief Cees van der Laan also said everyone who is critical of President Erdoğan in Turkey must be prepared to face trials, witch hunts, detentions, threats and assaults. “Seizing critical media outlets is the only thing left among the violations of freedom of expression and freedom of the press by the Turkish government,” Laan said.