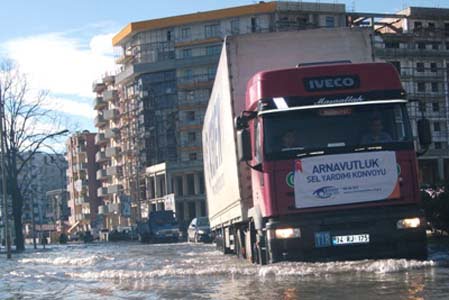 Kimse Yok Mu relief foundation extended its hands to poverty-stricken community trying to survive harsh winter conditions in Petrella, one of the first settlements to welcome Ottomans in central Albania.

Foundation official Mustafa Ilhan reported that aid packages of one-month food supply from Turkey have been delivered to the needy in Petrella county.

In his press release, Ilhan drew attention to high unemployment rate among the young in the country, where alcohol consumption is considerably high due to low prices. However, even such a small county, Petrella, has five lottery kiosks. Speaking of Petrella’s significance in Albania history, Ilhan said “Suleyman Pasha, who Suleyman Pasha Complex in one of the earliest settlements in Tirana was named after, is originally from Petrella. And Ethem Bey who Ethem Bey Mosque, one of the few mosques that could survive Enver Pasha’s oppression, was named after is Suleyman Pasha’s grandson. The number of mosques and tekkes (dervish lodges) reached 12 during Ottoman rule but each was demolished in Enver Pasha period.

The aid revived charity among Albanians

Noting that Kimse Yok Mu initiatives have revived charity and cooperation tradition among Albanians Ilhan went on to say “Human relations were seriously ruined in the country in Enver Pasha period. He not only tore down the mosques and madrasahs but also banned even naming children with Muslim names. What is more, he compelled the Muslim to marry Christians and sent out spies among public. Relief and aid foundations succeeding Enver Pasha’s oppression too abused the nation where even a husband and wife didn’t trust each other. As a result, Albanians take a dim view of aid foundations. They have never heard of Muslims’ aid in their country while certainly being familiar with Greek foundations’ frequent arrivals. That is why they asked “Do Muslims help?” in astonishment upon seeing Kimse Yok Mu volunteers helping across Albania. They express their gratitude to Turkish people for remembering them in hard times.” Kimse Yok mu delivers its aid through a local foundation in the region.

Kimse Yok Mu provided aid to families through its partner foundation Compassion which is of vital significance for rural communities of Albania, in particular. The activities of globally active foundation Kimse Yok Mu are well-recognized by government officials as well as Albanian people.

Malsimale Vice-Governor Sytki Wdrecaj underlined that Albania went through hard times of 50 years and Petrella was a disadvantaged region in the past too. As Wdrecaj stated the state keeps alleviating the region but contributions of civil foundations are of great importance. Wdercaj, who was present during aid deliveries, said “Two Albanian women approached and asked me to thank Kimse Yok Mu on their behalf. They accepted the aid from Tsurkey appreciatively as they were not for Muslims only. All the needy benefited them. Thank you very much for the aid. But the scope of assistance shouldn’t be restricted to what it is now. Turkey has always stood by us since we adopted democracy. The existing partnership should continue increasing progressively in other fields too.”

A local woman Luce Sufaji Shkrel, 47, who lined up to get one of aid boxes distributed in a school yard, expressed her feelings: “I have two daughters. One is married and the other is engaged. We experienced hard times after my husband’s death. I have a seriously sore foot and we live on the state’s financial aid. The aid you send means a lot for us. Thanks in no small part to you for it. We are grateful to Turkish people as they remembered us in hard times.” Another woman Rushe Holaj, 50, also thanked Kimse Yok Mu and said, “We were almost running out food. We wouldn’t be able to survive the month without this aid. We have our Turkish friends in our prayers. May God be with them.”

Source: Excerpted from the piece published [in Turkish] on Medya73 newspaper, 10 March 2013. English translation is retrieved from HizmetMovement.Com