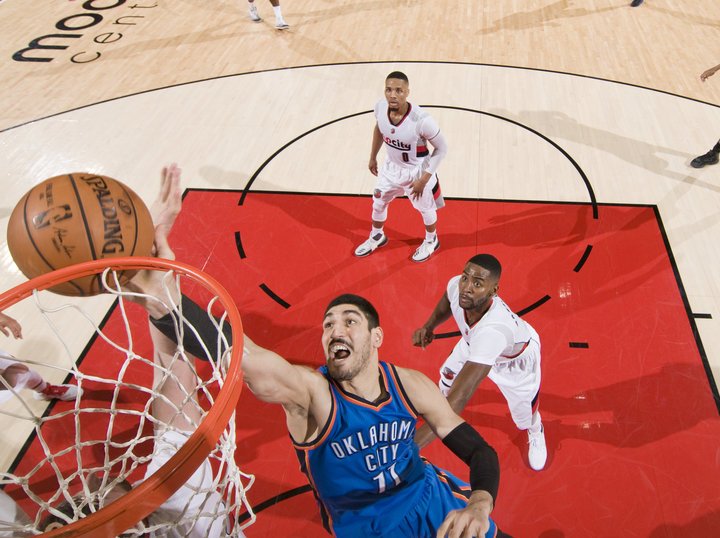 Enes Kanter is the best-known figure in a group that’s getting purged by Turkey, whose leader is taking the country away from democracy. His only crimes were twofold. First, he likened Turkish President Recep Tayyip Erdogan to a Nazi. Such a charge is ludicrous, especially since Erdogan himself praised Hitler’s style of government.

Second, Kanter has been labeled a member of a spiritual group led by Fethullah Gulen, a group accused by Turkish President Erdogan of backing a July coup in 2016. Such charges are ludicrous that an aged, ill cleric who has lived in Pennsylvania since 1999 could be a coup mastermind, as opposed to a few misguided lower-level military officers. The Gulen movement even denounced the coup at the time it had its best chance of succeeding.

Kanter is hardly the only target. Hundreds of thousands of Turks have been fired or detained, and tens of thousands have been jailed. Most of those arrested aren’t even military members: they are journalists, prosecutors, judges, police officers, and professors, with women and children in prison under harsh conditions. Hundreds of universities and media outlets were shut down. No one can show judges and professors leading the coup. If the coup really had hundreds of thousands of participants, instead of a tiny handful, it might have succeeded!

Kanter nearly found himself in one of these overcrowded prisons. As he traveled to Romania, Turkey canceled his passport and tried to have him extradited. But he was able to make it back to the United States safely, for now, though he still has to watch out for President Erdogan’s attempt to extradite him and other Turks linked to Gulen back for “punishment” in Turkey.

Erdogan couldn’t grab Kanter, for now. But he did imprison Kanter’s father, even though his dad had spoken out against Gulen and publicly disowned his son. But even in today’s Turkey, that’s not enough to make you safe. Just being associated with someone who is associated with Gulen is enough to get you locked up, as this American pastor found out(locked up for eight months without a trial in Turkey).

Some people weren’t sure about whether to trust Erdogan, or the many groups he’s tried to purge, like the Kurds, military, nationalists, Alevis, secularists, leftists, and Gulenists. The arrest of the Turkish leader of Amnesty International has left little doubts as to how Erdogan feels about human rights. And that brutal beat-down that Erdogan approved of his security forces provided peaceful protesters in Washington, DC provided a sneak peek for the world how the Turkish president deals with those he dislikes at home. In a rare display of bipartisan unity, the House of Representatives voted 397-0 to condemn the action by Erdogan’s security forces.

Right now, you’re probably wondering what you can do about it. There is something you can do. Contact your member of Congress (and senators) and let them know you support keeping those who have fled Erdogan’s persecution, like Enes Kanter, safe here in America, instead of sending them back for prison and a possible death penalty (the Turkish president supports bringing back capital punishment) as so many countries have done. It’s what we did to help those fleeing repression by Communist regimes in the Soviet Union, East Europe, Cuba and Vietnam during the Cold War.

Otherwise, we could see Kanter and fellow Turks deported and likely executed for disagreeing with his country’s president. And Americans can’t let that happen.

John A. Tures is a professor of political science at LaGrange College in LaGrange, Ga. He can be reached at [email protected]. His Twitter account is JohnTures2.

SEZAİ KALAYCI, NEW YORK Family and Social Policy Minister Fatma Şahin has praised the Journalists and Writers Foundation (GYV) for its members’ courageous coverage of important issues at a time when the country is taking steps for democratization. Şahin’s remarks came during a panel discussion on women’s issues held by the GYV and Peace Islands […]