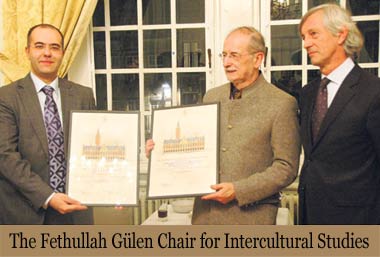 The Fethullah Gülen Chair for Intercultural Studies was established with the efforts of the Brussels-based Intercultural Dialogue Platform (IDP), whose honorary chairman is Gülen. An inauguration ceremony was held on Monday at the university. As part of an agreement signed between the IDP and the university, the chair will carry out academic research and organize conferences for five years.

Social and Cultural Anthropology Professor Johan Leman, who will be the chair holder, and university Rector Mark Waer expressed pleasure to host the chair. In a statement he released on the occasion of the establishment of the chair, Leman said that as an intellectual and spiritual leader, Gülen has encouraged his Muslim fellows to take initiatives to build bridges, particularly between Islam and modernity, science and spirituality, and reason and faith.

Noting that he has motivated millions to engage and invest in sustaining peace and improving community relations through nondenominational education and intercultural dialogue, Leman said Gülen’s recognition of democracy as the only viable political system of governance and his emphasis on diversity, equal access to human rights, freedom of belief for all, loyalty to the law of the land and the non-instrumentalization of religion in politics make his message one of the most promising calls for the future of relations between the West and the Muslim community.

“His message now has a growing influence, particularly among the second-generation migrant-origin citizens of Europe. It is our hope that this chair, inspired by this message, will contribute to the bridge-building process through promoting intercultural understanding and stimulating research on relations between Muslim communities and the wider society in Belgium and Europe,” he said. Gülen is a Turkish Islamic scholar well known for his teachings promoting mutual understanding and tolerance between cultures. One of the world’s most influential Islamic scholars, Gülen came out at the top of the list of “The World’s Top 20 Public Intellectuals” by the magazines Foreign Policy and Prospect in 2008. Now residing in the US, Gülen has pioneered educational activities in a number of countries along with efforts to promote intercultural and interfaith activities around the world. He has written nearly 50 books in Turkish, some of which have been translated into several languages.

IDP Chairman Şerafettin Pektaş told Today’s Zaman that they see the establishment of the chair as the extension of their 10 years of work in Brussels.

Waer said the university gives the Muslim world the message that the university is open to “academic dialogue with the Muslim world.” Stating that they show that Muslims and Catholics can work together in academia, he said this message should not be played down. Addressing claims that Gülen and his followers have a secret agenda, Waer said they pay no attention to this. Professor Leman also said these claims are groundless and exaggerated. Stating that they have received “warnings” from groups in Turkey when they announced that they would establish the Gülen chair, Leman said he has been in contact with members of the Gülen movement for three years and had never encountered a secret agenda.

Professor Khan considers Gulen more of a scholar than a sufi but like a sufi his compassion encompasses everyone. He does not have prejudice against anybody. He also asserts that Gulen never permits the political exploitation of Islam. Maimul Ahsan Khan, professor of Islamic Law, expounds Fethullah Gulen whom he got to know through a book in […]