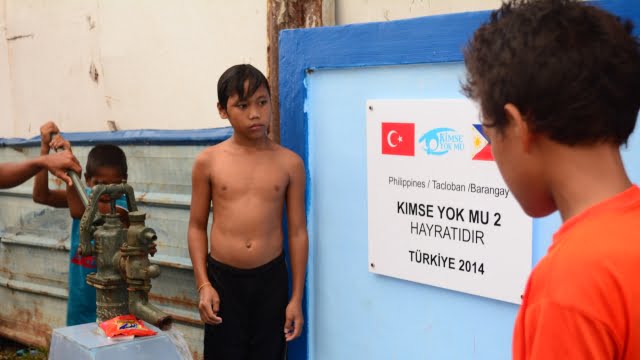 Kimse Yok Mu Foundation has been carrying on its relief efforts for the locals ever since the Haiyan typhoon hit the city of Tacloban last November. The foundation renovated a school building left in rubble after the disaster and supplied drinking water by establishing 10 water wells across the region. It has been unceasingly channeling the aid donations from Turkish people to the victims over the past year. The initial target was 50 water wells and 10 of them are now at the service of the locals. Moreover, “Make a Living” project is already well underway, providing professional training on catering, sanitary, clothing, beauty care and computer hardware services licensing trainees to start business across the country.

A high school building consisting of 14 classrooms accommodating 700 students in total has been repaired and renovated. Deputy Chua, a prominent figure in the city, spoke to Cihan: “You’ve never left us alone since the very first day. Many relief and aid organizations left here after a while. Great that we have Turkey and Kimse Yok Mu! On behalf of my country, I would like to thank you, Kimse Yok Mu!”

The Haiyan typhoon hit the Leyte and Samar islands of Tacloban back on November 8th, 2013, claiming 10 thousand lives and leaving damage of 1,5 billion dollars behind.

The two members of Association of the Kadirli Medical Professionals (a district of the province Osmaniye in Turkey), general surgeon Cem Oruc and anesthesiologist Ali Ihsan Atac are back from the Central African Republic. The medical team, welcomed on their arrival by the deputy-minister of health, performed 40 operations and some one thousand examinations in […]

Volunteers of Kimse Yok Mu aid organization welcomed by minister in the many countries which they went to hand out meat to the needy families. In Guinea, Niger and Mali, ministers coordinated the aid and also some ministers joined the aid delivery to the needy families. In Guinea, Interior Ministry Botche Cande coordinated the aid as well as Minister of Family and Social Policies, Sanaba Kaba, he himself handed out meat packages.