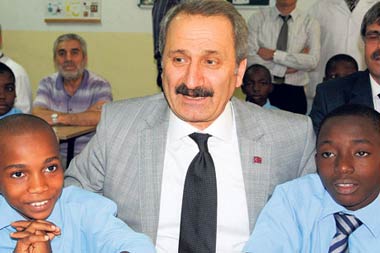 “I meet with my colleagues in every African country I visit. The common wish they all have is for more [Turkish-run] schools to be opened. I care very much about these schools. I visit them every time,” Çağlayan, who is on an official visit to Nigeria, Ghana and Equatorial Guinea, said during his visit to a Turkish college in the Nigerian capital city of Abuja. Explaining the importance of Turkish schools in these countries, Çağlayan said: “The children of almost all ministers and other high-ranking officials in Africa are educated in these schools. It may be that the ministers and prime ministers of the future will come from among them.” Hikmet Çoban, general director of all Turkish schools in the country, briefed Çağlayan and the delegation accompanying him about the schools. Çoban explained that there are 15 such schools in six Nigerian states. The first school was opened in 1998 and had seven students, Çoban said, adding that these educational institutes now have over 4,000 students. He also said Nigeria is home to a Turkish university with a student body of 300 students. Many students who graduated from Turkish colleges go to Turkey to pursue higher education, Çoban added.

While there, Çağlayan attended a class in the Turkish-Nigerian school he visited. Sitting between two Nigerian students, Çağlayan asked the class if they had ever seen Turkey. Only one student responded affirmatively. Çağlayan then turned to Turkish Exporters Assembly (TİM) President Mehmet Büyükekşi and Ankara Chamber of Industry (ASO) President Nurettin Özdebir to ask them if they could host students in Turkey for a one-week vacation. After Büyükekşi and Özdebir responded affirmatively, Çağlayan invited them to Turkey. The expenses of the students’ trip will be met by TİM and ASO.

In her remarks following the meeting, Sanchez hailed the schools for their achievements. “I attended the Turkish Language Olympics’ the Philippines finals on Feb. 26. I witnessed your sincerity and efforts there too. You are teaching not only academics but friendship, peace and solidarity as well,” she said