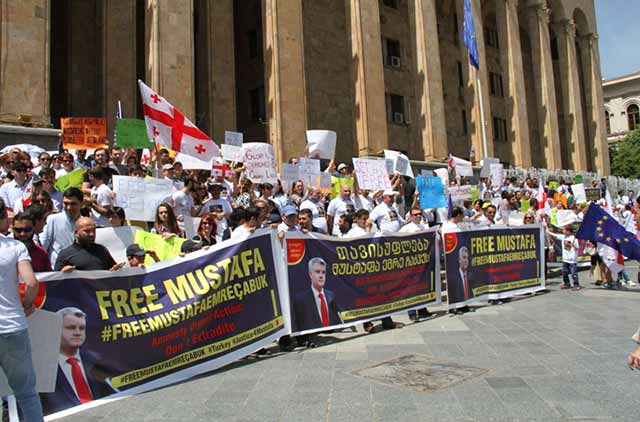 Georgia’s Ministry of Refugees has refused to grant a refugee status to Mustafa Emre Çabuk, a manager at the Private Demirel College, a school linked to Turkish opposition political figure Fethullah Gülen, who was detained in Tbilisi on Turkey’s request.

Çabuk’s lawyer Soso Baratashvili said that the ministry had ‘no legal grounds’ to reject his defendant and his family.

Baratashvili said they would appeal the decision in court.

The ministry had been considering asylum for Çabuk family since June, but his lawyer was informed on 7 July they had turned down Çabuk, a father of two.

According to Baratashvili, Çabuk’s wife Tuba Çabuk, who claims to have been receiving threats on her social media profiles, will hold a press-conference on 10 July to make an official statement.

Çabuk was detained in Tbilisi on 24 May, accused by Turkey of ‘supporting a terrorist organisation’. Tbilisi City Court ordered Çabuk’s provisional detention for three months, and he remains in custody.

Later in June, as rights groups urged the authorities not to extradite the teacher, Georgia temporarily halted extradition procedures against Çabuk, while the Ministry of Refugees considered his application for asylum.

By law, If Çabuk’s asylum request is denied, the extradition process against him will continue. However, the maximum duration of pre-extradition detention in Georgia is 9 months.

Çabuk has been living in Georgia since 2002, when he started teaching at Batumi’s Şahin School, before working as a manager at Demirel College in Tbilisi. His wife and two children also reside in Tbilisi.

Çabuk, a citizen of Turkey currently residing in Georgia’s capital Tbilisi, is not the first to be detained allegedly for being connected to Fethullah Gülen. Turkish businessman Sinan Saraç was detained in Georgia earlier in May for ‘supporting FETO’.

‘Fethullah Terrorist Organisation (FETO)’ is how Turkish authorities have named the movement lead by the former Islamic Cleric and former ally of Turkish President Recep Tayyip Erdoğan. ‘FETO’ is considered a terrorist organisation only by Turkey.

Another school, Şahin lyceum in Batumi, had its license revoked by Georgia’s Ministry of Education In early 2017, after the Turkish Consul in Batumi claimed that the school ‘raises terrorists’.

The private International Black Sea University in Tbilisi is also reportedly associated with the Gülen movement.