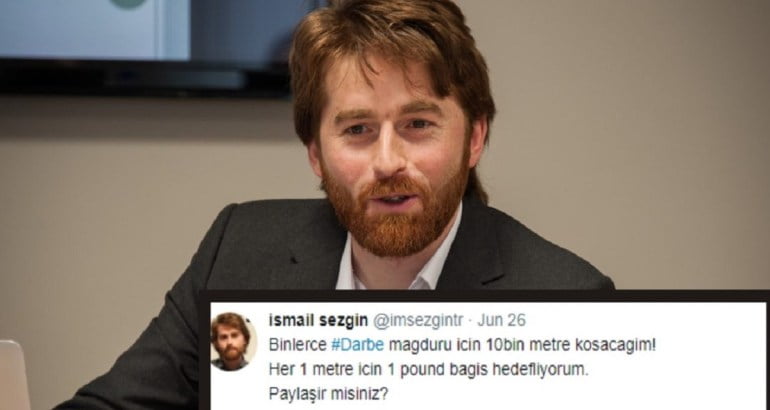 İsmail Sezgin, a London-based Turkish academic has tweeted on Tuesday that he will run a total of 10,000 meters in support of the families hit by an ongoing purge by the Turkish government since a controversial coup attempt on July 15, 2016. Releasing a statement on moneygiving.com, Sezgin said that he aims at raising a fund of 10 thousand pounds to help purge-victim families in Turkey.

Stating that Turkish people are living through a very difficult period Sezgin said that “A vicious coup attempt has victimized thousands of people so far; 249 people died on the night, many children became orphans; Thousands of civil servants have been purged. Teachers, judges, doctors, engineers and police officiers are the main victims. Their families are in dire situations; More than 50 thousand people are arrested, most have not been to court yet but their families are struggling to survive outside without any income. We are aiming to raise ten thousand pounds to help remedy some of the tragedies in Turkey. Please donate generously.”

Turkey survived a controversial coup attempt on July 15, 2016 that killed over 240 people. Immediately after the putsch, the Justice and Development Party (AKP) government along with Turkey’s autocratic President Recep Tayyip Erdoğan pinned the blame on the Gülen movement.

At least 161,751 people were detained or investigated and 50,334 people were arrested in Turkey in the framework of the Turkish government’s massive post-coup witch hunt campaign targeting alleged members of the Gülen movement since the controversial coup attempt on July 15, 2016, according to statistics reported by state-run Anadolu news agency by basing on information taken from the officials from Turkey’s Justice Minsitry on June 13.