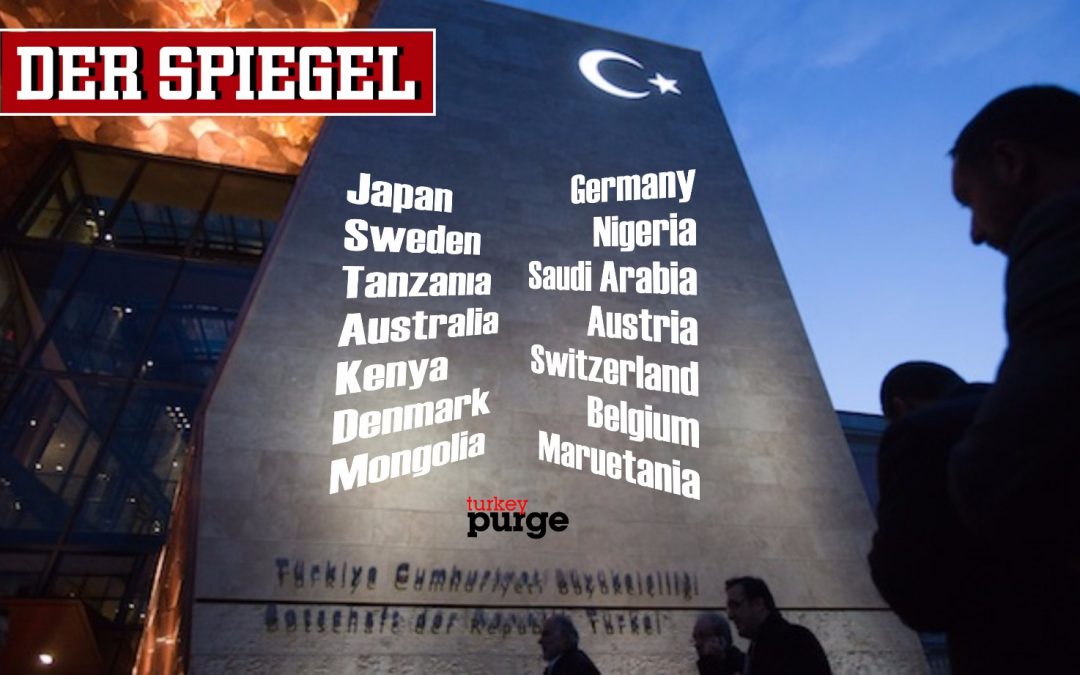 “The diplomatic cables contain information collected by Turkish diplomatic outposts in 35 countries,” said an article on the magazine on Friday.

President Recep Tayyip Erdogan put the blame on the Gulen movement for the July 15 coup attempt.

Embassy officials document the organizations in which Gülen supporters are active and the media they write for, the magazine said. Among the countries that Turkish government’s long arm has reached to are Japan, Mauretania, Sweden, Tanzania, Australia, Kenya, Denmark, Mongolia, Germany, Nigeria, Saudi Arabia, Austria, Switzerland, Belgium.

“The request to compile the files came directly from Ankara. On Sept. 20, 2016, the Turkish government’s religious agency, Diyanet, sent out an order asking” for detailed reports about organizational structures, activities and educational institutions of the movement,” read the article.

As a result of such pressure, parents in many countries have since pulled their children out of Gülen schools out of fear they will be subject to abuse from other members of local Turkish communities or that they will be banned from re-entering Turkey, Der Spiegel underlined.

“We need to apply legal means to crack down on the spying structures of the Turkish embassies and organizations,” Austrian Green Party politician Peter Pilz told the magazine.

Meanwhile, the article also stated that Turkish-funded mosques play a crucial role in having placed Erdogan opponents under observation. “Several imams are believed to have spied on members of their congregations and six have been withdrawn from Germany after the spying allegations emerged. There are similar suspicions of mosque associations in 37 other countries.”

The pro-government Sabah daily’s Europe edition, Sabah Avrupa, has set up a telephone line for its readers to report followers of the faith-based Gülen movement, against which Turkish authorities launched a witch hunt over its alleged involvement in a failed coup last summer.

On Dec. 25, Mahir Zeynalov sent out two tweets. “The first tweet contained a link to a news report about the second wave of a massive graft operation and how police blocked a raid involving more than 40 suspects, including Saudi businessman Yasin al-Qadi — listed as a specially designated terrorist by the United States,” Today’s Zaman reported Jan. 31. Zeynalov’s tweets are no longer present on his Twitter account. “’Turkish prosecutors order police to arrest al-Qaeda affiliates, Erdogan’s appointed police chiefs refuse to comply,’ read the first tweet. In the second tweet, Zeynalov shared a news report detailing al-Qaeda suspects’ escape from the country after police chiefs blocked the raid on Dec. 25.”