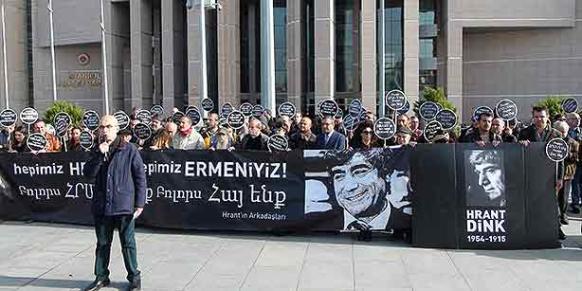 The Friends of Hrant held a press conference in front of Çağlayan Courthouse before the eighth hearing in the retrial of the Dink murder on Friday. (Photo: Cihan)

A group called Friends of Hrant Dink, including lawmakers and activists, has harshly criticized the government’s recent attempt to associate the Dink’s murder with the Gülen movement, inspired by the teachings of Turkish Islamic scholar Fethullah Gülen, calling onauthorities to expose the real criminals behind the murder.

The group held a press conference in front of Çağlayan Courthouse before the eighth hearing in the retrial of the Dink murder on Friday. Speaking on behalf of the group, Cumhuriyet columnist Aydın Engin said that there are attempts to link the murder with one individual or a group. Referring to the “parallel structure,” a term invented by President Recep Tayyip Erdoğan to refer to the Gülen movement (Hizmet movement), Engin said: “There are attempts being made to associate the murder with a nondescript structure called ‘parallel.’ However, we have known from the beginning that it was a murder of national reconciliation.”

A court overseeing the retrial of the Dink murder postponed the trial to April 28.

Engin said the trial is nothing more than a show, adding that concealed evidence, suspected public officials being promoted instead of convicted and court decisions have made them all pessimistic. Stating that the Dink murder has so far been used by the Justice and Development Party (AK Party) for various political reasons, Engin said that the government is trying to blame the Gülen movement for it. The government has been in conflict with the movement since a corruption scandal that implicated various high-ranking state officials was made public on Dec. 17, 2013.

The columnist claimed that Dink was murdered as a result of a cooperation between police, soldiers, the National Intelligence Organization (MİT) and some provocateurs. “We know the names of most of the public officials involved in the murder. They cannot make us believe in this deceit. They cannot confine this trial only to the parallel [structure] or any other particular structure,” he said. He also said the state network behind the murder should be revealed and all the criminals should be punished.